There are an almost infinite number of blogs and sites dispensing advice, sharing looks, swapping recipes or just showing off aesthetically pleasing things. (The Guardian, 2011)

Infinity is very big, and “almost infinite” is just as big. To try and grasp a sense of the infinite is difficult, if not almost impossible.

Modernist architecture promoted the prospect of unconstrained space claiming to allow infinite possibilities for movement. The architecture did not tell you where to go and what to do. Wall planes seemed not to terminate at orthogonal junctions, but appeared as fragments of planes apparently stretching to infinity, as supposed in Mies Van der Rohe’s Barcelona Pavilion. 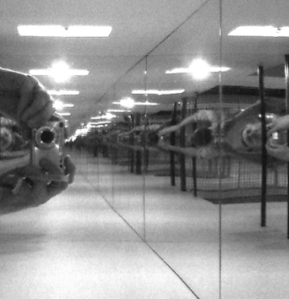 Vanishing points in perspective drawings are infinitely far away, and cameras usually have an infinity setting that ensures that objects a long way off are in focus.

Diagrams showing the sun’s rays hitting a surface on Earth are drawn parallel to each other, which is the condition of adjacent rays emanating from a point source at an infinite distance.

So infinity is ever present in geometry, apparatuses, architecture, maths, and language. But how big is it?

Infinity is clearly beyond imagining, which takes us into the realms of the Kantian sublime: “even to be able to think the given infinite without contradiction requires a faculty in the human mind that is itself supersensible.” (p.138)

I wonder if YouTube can help: that vast, but by no means infinite, array of arbitrary animated presentations and imaginings.

The closest I’ve come to a feeling of the infinite is from staring at a 5 minute  fractal zoom. These are animated visualisations at ever increasing detail of the Mandelbrot set of self similar but varying twirls and twists of infinitely detailed filigree patterns. Visualisations of the Mandelbrot set are generated by a relatively short computer programme that involves an extremely large number of iterations (repeated calculations). The number series being represented revolves around the simple formula Z = Z*Z + C.

According to the author of one such animated deep zoom,

… if the first frame were the size of the visible universe, the last frame would be the size of a single bacterium, and the final baby Mandelbrot Set shown would be approximately 0.02 mm in diameter, which is microscopic to the naked eye! Even more remarkable, this barely even scratches the surface of the infinite depths of the Mandelbrot Set!

http://www.youtube.com/watch?v=VSDI84Mm-hI (You might want to turn off the sound.)

Over a period of five minutes you will zoom in from something the size of the known universe to the size of a bacterium, by doubling the scale every three seconds. Another few minutes and you would be at the scale of the Higgs Boson particle, and beyond.

This scale transitioning is comparable to the number series created by placing a grain of rice on a chessboard square, doubling it on the next square, doubling that for the next square and so on. The last square to be filled would have to be big enough to take 2 to the power of 63 grains of rice (plus 1), by some calculations requiring a grainstore with a footprint of about 25 kilometers square. The point of the demonstration is that we have little idea at the start of the doubling exercise that it will result in something so far off the scale … a rapid movement towards infinity … almost.

The speed at which we can navigate these scale transitions has to draw on our “supersensible” mental faculties, and is attributable to the properties of exponential number series, about which we seem to have very poor intuitions.

The boundary to the Mandelbrot set is characterised by massive variation and is infinite in extent. Zooming into this tangled field must be what it’s like to travel through an abyss. However deep we probe the stronger the impression that there’s after all nothing there: infinite extent bereft of meaning, unlike the lived universe, and hopefully unlike the Internet … almost.

Jacques Derrida refers in many places to the infinite. “Mise en abyme” means ‘putting into infinity’, or standing at an abyss or chasm, the effect you get when standing between two parallel facing mirrors and look into the infinitely receding reflections. Mise en abyme is also evident where a picture appears within a picture, or the dreamer encounters a dream within a dream. Derrida also uses the term to account for the interreferentiality of texts (intertextuality), and the elusive production of meaning. “… it can be called the play of the trace. The play of a trace which no longer belongs to the horizon of Being, but whose play transports and encloses the meaning of Being: the play of the trace, or the différance, which has no meaning and is not. Which does not belong.

There is no maintaining, and no depth to, this bottomless chessboard on which Being is put into play (Derrida, 1982 p.22).

To see a world in a grain of sand,
And a heaven in a wild flower,
Hold infinity in the palm of your hand,
And eternity in an hour. …