Sylvain Chomet created the animated films Belleville Rendez-Vous and The Illusionist. His earlier successful short film was called The Old Lady and the Pigeons. Art and entertainment often draw on the skilful manipulation of stereotypes, and their exaggeration. Skilful animators such as Chomet make their characters sufficiently recognisable and true to type, but with a twist. There’s something alien about them. The harmless little old lady turns out to be not so helpless, and that makes us laugh — if not discomforted. 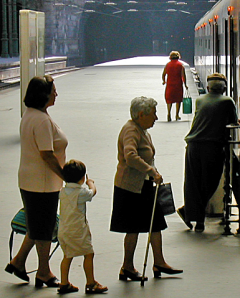 Representations of old age are relevant to the current social climate. It’s well known that people are living longer. Populations are getting older. Older people are no longer an eccentric minority. Do the old stereotypes still apply?

A leading think tank on ageing and longevity released a report this week on how older people are coping with digital technologies. It seems that computer users are under-represented among people over the age of 70. In the survey accompanying the report, it seems that non-Internet users were less likely to say that they “often felt lonely,” a negative way of asserting that access to the Internet probably provides a means of softening the effects of isolation felt by many older people. People who use the Internet seem to be more sociable, join associations, and have a greater quality of life. The report suggested that society needs to nudge reluctant older people into the world of the Internet.

Here’s another idea (not in the report): Older people represent a growing, talented, wise and potentially productive sector of the population. In 20 years time there will be a much larger number of people over the age of 65 who are accustomed to travel, are adept users of digital technologies and communications, and are able to harness self-help opportunities, as do many people now across the generations. People in old age will be characterised less as a dependent minority. Many of yesterday’s leaders in the arts, sciences, business and politics will move into old age. Larger numbers provide an increased talent pool that will include those who can be articulate about and influence the welfare of the general population. For how much longer will we hang on to the cartoon characterisations of old age: sweet old ladies, grumpy old men, wise old sages, dotty aunts, aged eccentrics, and undereducated technophobes?