“Loon” is clever branding. The association with lunatic and the extra terrestrial is obvious. According to the OED lunatic originally meant “affected with the kind of insanity that was supposed to have recurring periods dependent on the changes of the moon.”

As I’m researching mood, I feel I have to look at the moon, or perhaps howl at it. Some studies provide tantalising evidence of a link between the cycles of the moon and the moods people are in, though other factors intervene, such as the weather.

According to one study, “In both summer and winter, people seemed to be less helpful when the moon was full than when the moon was less full” (p.1950), though the data was “ambiguous.” It may not be the moon that affects people’s moods so much as the luminance of the night sky, the tides, the weather, disturbed sleep, etc. Taking account of “confirmation bias,” the evidence is probably available if you really want to believe that the moon affects moods.

Certain myths strengthen the relationship between lunar cycles and human behaviour, and help us want to believe it. A fascinating thesis by Erin Flaherty summarises some compelling links between lunar cycles, menstruation, werewolves, and the Jekyll and Hyde story. Producers of werewolf horror movies generally depict the transformation of male to werewolf on the night of the full moon as a transformation to extreme masculinity: predation, aggression, an excess of hair, deep voice, etc. The transformed creature is the lycanthrope, human-wolf hybrid. 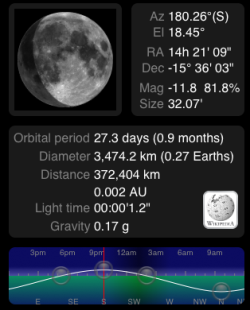 But Flaherty marshalls support from several sources to indicate that the werewolf is really about the feminine taken to extremes: “As a woman’s menstrual cycle has come to be defined by monthly blood loss, physical changes, vicous temperaments and insatiable appetites, so is the werewolf’s transformation” (11). She argues provocatively that the werewolf transformation myth is about man becoming woman, the real “monster” in patriarchal society. That’s one line of argument.

The Jekyll and Hyde story is also about transformation, and the doppelganger motif, as if each of us has within ourselves both the potential to (i) fit in as if normal and (ii) stand out as anti-social and monstrous. In Freudian terms human nature involves tussles between the sober and sane ego versus the more animalistic id part of our natures: a mood of sober reasonableness contrasted with occasional trasformation to the converse mood of animalistic irrationality, and even rage. After all, people in a really bad mood are “beastly.” They become “monsters.”

In more abstract terms these narratives speak of the relationship between mood and transformation. The putative agency of the moon adds a third term. At the very least, the moon metaphor reminds us that there is a cyclical aspect to people’s moods.

The challenge for me is to think about what if anything these ideas have to contribute to how we understand digital media as mood modulators. Here are some candidates.