How to grow a project

It’s good to be ambitious, to aim for impact and to make a difference. Here are some ambitious project ideas: create an exhibition, build a pavilion in a city square, fabricate a dynamic sculpture in a workshop, produce an interactive computer app, make a film, run an elaborate experiment, conduct a massive survey, embark on a Kickstarter campaign, run a big event involving guest speakers, performers, and audience activities that will provide useful data for research, or start a business.

If you want resources to make it happen then you will need a well-formulated project proposal, indicating aims, outcomes, costings, and a plan for how the various stages of the project will pan out over time. Or do you?

Unless you have undertaken such a project before it’s unlikely you’ll have a realistic appreciation of what’s possible. You’ll also have trouble persuading others that the project is feasible, no matter how detailed your plan.

So here’s an idea: scale down your ambitions. Think SMALL. You will still need a plan. A SMALL plan needs to show how you will scale up your project over a series of iterations. In fact a good project proposal should indicate how you intend to explore the project idea and to grow it over time.

What does planning for iteration from SMALL to BIG mean in practice? If you want to create a big exhibition, before booking the big venue, plan to try out your exhibition idea in a small, local setting. If you intend to build a pavilion then make a model, or build a small part of the building first to test the idea. Before you commit to valuable resources in a workshop to make your dynamic sculpture simulate it in a computer, or make it out of paper and balsa wood first.

If you want to create a fully functional iPhone app then simulate it first as a paper mockup, or cobble it together in Flash on your laptop before looking at ways to produce an app for distribution on the Apple App Store or Google Play. Before recruiting a production team and getting expensive equipment to make a movie, mock up something with the camera on your smartphone. Before planning the big event see if you can get your friends and colleagues interested in a smaller scale or limited version of the same thing.

This is often how designers work anyway, with models, sketches, maquettes, mood boards and prototypes. Movie-makers and animators create storyboards and run screen tests of actors and test out sets and locations using conventional photography — before bringing in the big expensive teams and hiring sophisticated equipment. Inventors iterate through different versions of their idea, from basic to more sophisticated. Programmers and interaction designers prototype software ideas and then test them with user groups, before scaling up to heavy duty robust coding.

To work from SMALL to BIG is to try things out before they get expensive or risky. It’s a way of finding out what works and what doesn’t. The process also helps you generate ideas. Making, experimenting and prototyping contribute to thinking.

It’s also a way of eliciting the requirements for the final product. You can get feedback at the early stages of the project that feed into its further development.

SMALL to BIG iterative project planning is not just a matter of creating a prototype which you then follow up with the real thing. Prototyping is part of a sequence. Iteration fits nicely into a research and learning context — learning by doing.

Keep a record of the process. These days it’s easy to document progress via photographs, videos, notes, and blogs. That helps you learn from your successes and failures and informs the further development of the project.

Do I need a plan before I start to do anything? No. Start early on your experimentation, scoping, making, trialling, and prototyping. The requirement for a plan may emerge further along in the process — a course requirement, an application for research support, or passing a progression hurdle as in the case of a PhD first year review for example. The plan will be stronger anyway when you’ve already started to explore the scope of the project, practically.

In a project, nothing needs to be waisted. When it comes to that inevitable deadline, the final submission, delivery, or the sign off, then the products generated in the process can be curated as part of the final outcome. If (heaven forfend) you run out of time, then all those pilots and their documentation provide evidence of work done, other people can learn from them, and they constitute knowledge products in their own right. The steps in the process also contribute to effective story telling about the project. People love to know about false starts, challenges, and errors as well as successes along the way. If this is a research project, dissertation or thesis then include all those trials, or if space is limited just the most informative ones.

How can you plan for the unknown? Don’t be constrained by the view that you have to follow your plan in every detail. Everyone knows that plans change. Think of the plan as a demonstration of your ability to imagine the progress of your project. It needs to convince a similarly minded reader of the feasibility of your project. The plan will be stronger if you can indicate that you’ve already implemented some of the smaller parts of the project. Include a growth scenario from SMALL to BIG in your plan. 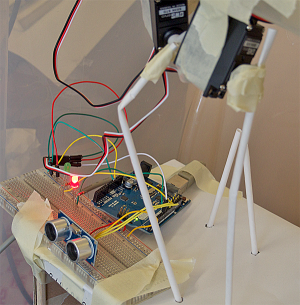 In an ideal world, if everything fell into place, what would you like to see as the final project outcome? What steps would you take to get to the final result? Provide a notional timeline with dates and durations. Describe any practical work completed up to now and how this supports your project. Describe your first steps once this plan is implemented, in detail. Describe how you will document and report the various stages in your project. There’s more that could be said, and much depends on the nature of the project, but remember to start SMALL and to grow your project in manageable stages.

This post was prompted by all those those overly ambitious projects I’ve seen started, progress through to frustration, until the author of the project realized they have to start with something that’s SMALL and manageable, eventually progressing to something BIG. In any case, you can claim that the final project is just a “scoping” study. When does a project reach finality anyway?

The cultural, social and spatial implications of computers and pervasive digital media spark my interest ... enjoy architecture, writing, designing, philosophy, coding and media mashups.
View all posts by Richard Coyne »
« Bear in the park
Attending to the world »

One thought on “How to grow a project”