Few would deny that architecture communicates, and in that sense is a language, or at least like a language. As pointed out by the philosopher and semiotician Umberto Eco architecture does something else as well: it functions. So a substantial tiled roof not only communicates protection from the elements, but functions to provide such protection.

Occasionally the two become uncoupled: the roof can be made to look very substantial from the street, but away from view it is made of aluminium sheeting with a different functionality. The communicative aspects of the design differ from the functional aspects.

The modernism of Walter Gropius, Mies Van der Rohe and others championed functional honesty. But many such architects produced buildings designed to look as though composed of light steel elements that concealed substantial fire-proof concrete clad frame elements set back from their facades. In any case, buildings often don’t function as promised.

The “misuse” of terms such as “function” prompted architectural scholars in the 1970s to re-examine architecture as a language. According to a champions in this linguistic turn, Geoffrey Broadbent, “The misuse, by architects and critics, of words such as functionalism, is itself sufficient reason for looking more closely at the language they use; at the relationships between buildings, the concepts which are used in discussing them, and the words by which those concepts are defined” (124).

He pointed out a further difficulty for scholars in having to select from a range of different schools of linguistic analysis, that are not entirely compatible with one another. One approach drew from the linguist Ferdinand de Saussure and his followers. Another focussed on Charles Sanders Peirce, and a third would pursue Noam Chomsky’s generative grammars.

(In fact, in his subsequent work, Broadbent veered to a critical engagement with Structuralism, derived from Saussure, which led in turn to Poststructuralism. Broadbent co-wrote a book published in 1991 on Deconstruction and the influence of Jacques Derrida.)

What are the similarities between verbal and architectural languages? If we think of language in terms of words held together by grammatical rules to form phrases and clauses, which in turn go to make up larger linguistic units (sentences and paragraphs), and with sub units within the words themselves (phonemes, morphemes), then there are parallels with building elements and their subelements. The composition of such elements according to rules into well-formed buildings suited to program and context hints at the idea of a grammar.

Writing about the time of this linguistic turn Donald Preziosi pointed out the major difference in the “signing medium” (4) between verbal (i.e. spoken or written) language and architectural language. In the case of verbal language we are dealing with a medium that is “relatively homogeneous” (4). There are only so many letters and punctuation marks in English (for example), and a relatively limited range of basic elemental sounds. And after all we are dealing just with marks on paper or sounds in the air.

Architecture on the other hand, along with the rest of the physical environment deploys every material known to human kind in order to offer up its communicative potential: “architectonic signs are realized through what appears to be an impossibly complex hybrid of media” (4), involving “anything drawn from the entire set of material resources potentially offered by the planetary biosphere, including our own and other bodies” (4). Basic psychology in any case identifies verbal language ability with particular brain functions, if not regions of the brain. Engagement with the communicative aspects of space, place, and architecture would seem to involve a range of sensory modalities, perceptions, bodily actions, and interactions.

Structuralism takes this step. For the anthropologist Claud Levi Strauss cultural linguistics involves taking whatever elements are to hand and putting them into certain relationships as part of a system of communication. So hunter-gatherer communities would use local animal species as a source of identification. So for some parts of the community it would be bears and eagles. But a community in a different location might self identify with lizards, swarms of wasps or the north wind. It’s the relationships that provide the medium of communication, rather than the elements themselves.

According to Structuralism, any objects displaying significant differences, in the appropriate context, will suffice as linguistic elements. As Preziosi said, such “distinctions and disjunctions” are able to “cue the perception of similarities and differences in meaning” (5).

The title of this post questions what happened to architectural semiotics. Semiotics sought to present as a science, which for many meant a system with agreed categories (of relationships) and the ability to predict the characteristics of communities, their practices and architectures. In spite of various attempts to do so, I think the field foundered on the attempt to identify linguistic units able to be of use instrumentally in understanding or designing buildings.

Preziosi came up with such a schema, involving distinctive features, forms, templates, figures, cells, matrices and compounds, structures and settlements each organised within further categories and matched against verbal linguistic elements (67). In the 1980s, I amongst others, hoped to apply such categories in computer-aided design systems. The lack of instrumentality and the ambiguity and arbitrariness of semiotic categories easily gave way to digital data, and the more manipulable idea of parametric library elements.

Contrary to either of these positions, many architectural scholars, in the company of other cultural theorists, seized on the idea that language is a system of differences, articulated in the idea of the binary opposition. If bears and eagles can be deployed to indicate significant differences within hunter-gather communities, then so can bike sheds and cathedrals within architectural communities — or concepts such as function and ornament, or function and communication, form and meaning, places and non-places, text and space, or any number of engaging oppositions.

To identify such oppositions also raises questions about the nature of the relationships between such terms and whether and how one of them might be privileged above the other. The linguistic turn drifts inexorably into the ethical and the political, supported by Jacques Derrida’s clever arguments that constitute the philosophy and architecture of Deconstruction.

Though not necessarily as amenable to instrumental manipulation as data-driven views about architecture, as I have argued elsewhere, Deconstruction and its variants have contributed to freeing up the design process, framing projects, enhancing critique, and not least providing vocabularies that keep people talking about architecture as rich, varied and even transgressive.

Other factors come into play in considering the drift from semiotics proper. Apart from the ascendancy of digital data, and in opposition to it, we have Phenomenology, which eschews the paraphernalia of instrumentalised linguistics. While elevating language as “the house of being,” Martin Heidegger amongst others downplayed the primary status of the sign. Before there are linguistic units, i.e. before there is anything to read in the environment there is the experience of being in the world as an embodied being. Embodiment seems to win out over the esoteric entailments of semiotic discourse. See for example Jonathan Hale’s new book, Merleau-Ponty for Architects.

I’m currently researching nature, and how biosemiotics rescues us from an obsession with digital data, at least in our relationship with nature, by showing that all things are caught up in networks of communication, even without human beings, other living organisms or technologies on the scene. It is interesting therefore to read Preziosi’s recourse to basic biology and evolution in his account of the semiotic landscape.

He constructs a helpful narrative around the idea that verbal language, gesturing and tool use developed together. Such speculations inevitably draw on the idea of human beings in direct contact with the natural world, and in which everything has the potential to “be significant in some way” (28).

“as noisy, messy social mammals, a band of humans would inevitably leave semiotic droppings, metonymic marks and traces throughout its passage so that information is constantly being broadcast in all channels, subsuming dynamic, complex, composite signals of all kinds. As highly social primates, early humans would be constantly assessing not only the finely-graded behaviours of each other, but also the continual flux of environmental information. In short, everything must be treated as potential evidence for something; everything must be addressed with a question; everything has a story to tell: but it is equally necessary to know what to ignore as noise” (39).

Preziosi here emphasises the human, but later on in the same book says something similar about communication among non-human animals and environments.

The following Google ngram shows the relative rise in the term biosemiotics and the decline of architectural semiotics in Google’s book corpus. Perhaps semiotics is due for a revival, though in a different guise. 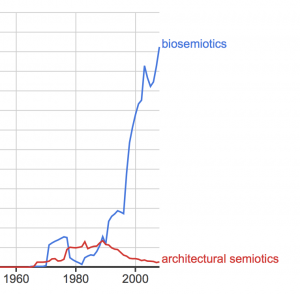