I’m interested in the Discrete Cosine Transform (DCT) method as a means of hiding one image inside another. It’s also a key technique in image compression.

I’ve implemented the DCT method on an Excel spreadsheet. The image below is an 8×8 grid of pixel values, in grey ranging from 0 = black to 255 = white. You could think of this as a small fragment of a much larger image. The shades of grey in this demonstration are generated automatically by a formatting feature in Excel. I’ll call this the “target image” as I want to see if I can transform it to a series of coefficients using the the DCT method, which I can then transform back to this image. 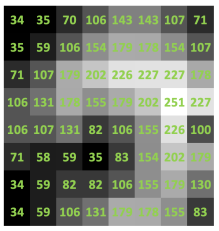 The values on the grid squares could also be elevation information on a block of land, or any other mapped digital data. Researchers have used DCT to identify features of a landscape, to classify digital models, and in automated image recognition.

I used DCT to calculate how much of each of a set of 64 grey patterns is present in the target image. These 64 “basis arrays” are grey-scale patterns generated by a cosine formula at successively increasing frequencies from left to right and top to bottom. So the patchwork squares show possible gradations or undulations of 8×8 pixel arrangements. This is analogous to the one-dimensional pixel arrangement I showed in the previous post.

The elements in bold are variables. $K$16 and$M$15 are the frequencies of undulations in the horizontal and vertical directions in an 8×8 image; $A16 and $B$15 are the coordinates of each pixel in the image.

DCT experts call the 64 patterned squares “basis functions.” The 8 columns and 8 rows of this basis function matrix are labelled 0-7. The values in the pixels range from -1 to +1 and the spreadsheet calculates these to several decimal places. I multiplied these by 10 in this diagram so the range is -10 to +10 and I rounded out the decimal places. That way the values could fit into the crowded cells of the spreadsheet.

The DCT procedure generates an array of multiplication factors (coefficients) that indicate the strength of each basis function in the target image. I calculated the coefficients by multiplying each of the basis function array pixel values by the corresponding value in the target array. The coefficient for each of the basis arrays is simply the sum (or average) of all those new values for each basis array.

Here’s what the basis arrays look like as a result of these multiplications. Too small to see on this screen shot, the coefficient values are written next to each basis function matrix.

These are not grey scale values, but show the strength of each of the basis functions in the target 8×8 image.

Sure enough, the process does re-generate a shaded image very close to the target. For simplicity, I’ve left out the constants that bring the values back to positive numbers within the 0-255 colour space, but the relationships are correct. The Excel shading function generates the white to black grey range automatically, taking the lowest number as black and the highest number as white. 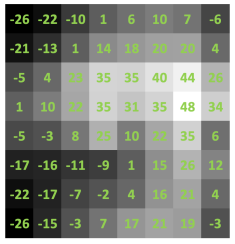 That’s the major part of the data compression process used in JPEG compression. The JPEG algorithm strings together all these coefficients for each 8×8 parcel of the original image. It does this in a diagonal manner starting at the top left corner of each 8×8 array. That produces a series of trailing zeros, and each list of 64 coefficients can be compressed using run length encoding, i.e. if there are 28 zeros in a row then indicate that in the file as 28 zeros rather than list all the zeros.

I thought that DCT is a roundabout way of freeing up space in the file that contains the target image for other, hidden information, but a steganalysis algorithm (for detecting hidden content) would notice noise in the compressed JPEG file. Any data in the lower right sectors of the coefficient table would also get washed away by adjustments to the JPEG compression parameters.

According to a helpful online slide presentation by Ryan Gibson, the usual method of hiding information in the coefficients is to insert data in the least significant bits (LSBs) of the coefficients. It would leave any 0s or 1s untouched. Presumably the coefficients of another, hidden image could be concealed in that way. There are many articles on improved steganography using DCT, and a plethora of methods.