My online searches into the mathematical techniques of Hidden Markov Models (HMM) led me to this diagram, known as a numogram. I have redrawn it here from the numerous instances on websites and books connected with the short-lived CCRU (Cybernetic Culture Research Uni) at the University of Warwick, and its legacies.

At face, it’s a state transition graph with nodes and directed arcs. The numbers are on the nodes rather than the arcs, and they are not probabilities. That said, the connection with Markov chains has been noted by some. See a blog post by an author who goes by the name of Xenogoth.

It’s not surprising that people interested in the CCRU cite the theories and techniques of the mathematician Andrey Markov. The CCRU draws on philosophy, mathematics, science and engineering from all quarters, appropriating anything that might contribute to imaginative myth making — hence their neologism, hyperstition, an amalgam of hyper (excessively energetic) and superstition.  This diagram is described on a CCRU web page:

“The Numogram, or Decimal Labyrinth, is composed of ten zones (numbered 0-9) and their interconnections. These zones are grouped into five pairs (syzygies) by nine-sum twinning [zygonovism]. The arithmetical difference of each syzygy defines a current (or connection to a tractor zone). Currents constitute the primary flows of the numogram.”

That doesn’t exhaust the explanation of course, which ventures into Kabbalistic numerology and the occult. The assessment of the movement by cultural critic Mackenzie Wark is apt: “The genius-poet now appears as another romantic persona, the madman, subtype, the schizophrenic.” I think that follows one of Giles Deleuze’s statements about the role of the intellectual, to identify with the condition of Schizophrenia.

The movement reminds me of something I concluded about the design methods movement, a tendency towards the techno-romantic, as suggested by this diagram by E. Matchett reproduced in the book on design methods by J. Christopher Jones. See post: Circles and how to get out of them.

See the bibliography for some controversies surrounding the writings of Nick Land the CCRU founder, including its apparent connection with the intellectual arm of the US alt-right. Also see posts: What’s wrong with accelerationism, The twist of the pen and Four-fold reality. 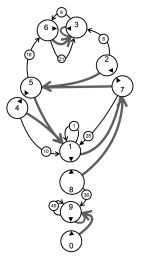