The way we watch television, listen to the radio and generally consume media has changed radically since the advent of the Internet and digital broadcasting. We now have user-generated online video (eg YouTube and Vimeo), broadcast and online television services (Sky, Tivo) that enable you to view movies and programmes on demand and on different devices (FilmFlex, LoveFilm), and DTRs (digital television recorders) for “time shifting” your viewing selections. Many households have multiple media output devices (television, radios and computers), and people might watch tv on a screen in the living room while browsing the web or tweeting on their iPads or smartphones. You can also view and listen while on the move — on laptops, tablet computers, and podcasts on personal stereos. 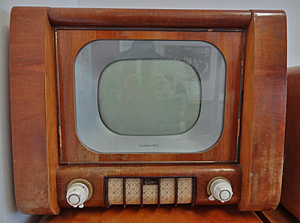 In spite of these radical shifts in media consumption practices it seems that people still prefer to read, watch or listen to their media according to programming laid out at set times of the day. “The schedule still rules,” according to Tess Alps, blogger on Thinkbox, a marketing organisation that caters to the interests of television advertisers.

A Thinkbox report insists that user-generated media content (YouTube etc) actually supports scheduled, linear tv programming: “Primarily used for ‘TV snacking’, YouTube acts as an informal PR machine for TV, enabling viewers to engage more fully with the content they love by watching highlights or snippets and forwarding them on – sometimes across the globe … In the case of ads, they even generate their own versions.”

Why do people watch television?

Presumably they want to be informed, challenged, entertained, and reassured; to kill time and to be diverted. People also want structure in their day, week, and season. There’s lots of support in architectural theory for this domesticating function. As I’ve argued elsewhere we are creatures of habit, who occupy habitats. We are inhabitants. What is a habitat but a place for the exercise of habits — habituated behaviour. We regulate our lives, if not by the clock, then by recurring practices that follow cycles, and cycles within cycles.  Even sleeping-in or taking an afternoon nap, staying up all night or following a wilfully irregular programme of party going acknowledges the importance of schedules, from which such activity provides occasional respite. 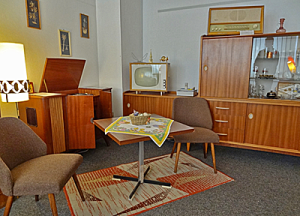 One of the many reasons for this conformity to temporal patterns relates to sociability. Habits enable people to come together according to regularly predictable or planned patterns of activity: for eating, working, sleeping, socialising, and being entertained. Domestic architecture is invariably arranged in subtle ways to support this temporal patterning.

There’s a second basic reason for watching television and consuming media — the support, creation and transformation of mood. A mood is a state of mind and body characterised as a “feeling” that does not have any object. It’s a “prolonged core affect without an Object,” according to psychologist James Russell. People might attempt to change their mood by food, medication, alcohol, caffein, other drugs, exercise, moving to a different setting, changing company, listening to music or watching television.

I like the way Tia DeNora characterised the use of portable stereos in her study of music in everyday life. Many of the subjects she interviewed would remark on the role of music that is under their control as a means of reinforcing or transforming states of mind, emotions and moods. One person described “how she uses music to induce and heighten a sad emotional state” (p. 57). Music is a way of representing to yourself how you are feeling. It can be cathartic, marking a kind of passage to a different state.

As a “cool” medium (McLuhan), television invokes greater passivity than music. It requires the consumer to be static, instilling a certain inertia, if not lethargy. Music does not necessarily demand attention, and can do its work in the background. But so can television. It seems that some households for some of the time use television in this way, as background, to create an ambience, perhaps a sort of sociability, and even a mood. The television may be on, but is anyone watching — or do they need to?

Armed with remote control, is the channel-hopping viewer in search of a mood — while grazing over Youtube videos or across multiple media channels? Such practices might also attempt to regularise or interrupt the schedule, playing into the cycle of the day’s moods. 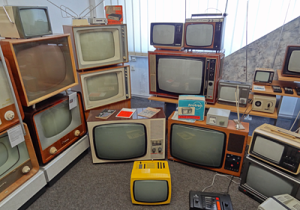 On the theme of mood, emotions and affect see E-motion and After affects.

Also see the website and blog for Moving Targets, a major project supported by the Scottish Funding Council in which we bring together Scottish universities, industry, agencies and audiences to develop new models for new media audiences in the creative media industries.