“Raster” is a suitably old fashioned term suggesting the scan lines of a cathode ray television screen. “Pixel” is more up to date. Pixel images have a privileged relationship with architecture. Much architecture is about the grid. 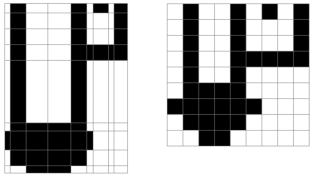 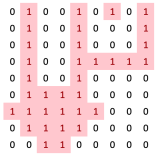 At much higher resolution, arrays of pixels are the dominant means of depicting space in the digital age. A cluster of pixels can stand in for a building in plan, a city block, region, a landform, landmark, field, forest or country. Aerial and satellite photography delivers pixel images at various resolutions, scales and values: within and beyond the visible colour spectrum.

In this case the sharpening is achieved by an algorithm that inspects each pixel in turn and calculates the difference between its value and the average of the 8 pixels that surround it to provide a new value. That process effectively exaggerates the colour value of a pixel in the context of its surrounding pixels — and produces a few artefacts along the way, especially at this resolution and at the edge of the frame.

The blurry image on the left is of the Helsinki station shown above, generated by a simple averaging algorithm. The attempt to sharpen it fragments the original. This demonstration proves that successive manipulation of a pixel image reduces the image’s information content, and it’s hard to get back to the original.

As I’m researching the ubiquity of cryptography in architecture, I’m bound to focus on the pixel image. It’s one way of accessing the spatial aspects of encryption. Pixel images can be scaled, compressed and hashed. They can also contain water marks and secret codes — to be explored later. In the meantime, here are some basic pixel image manipulations, constructed on an Excel spreadsheet. Once the algorithm is set up it’s so easy to generate more patterns. So here are some more.