They show up everywhere. We’ve never met, and probably never will. These bodies don’t only appear in Google StreetView, but in my digital photo albums whether I want them there or not. They are most visible when I zoom in. They even get singled out by the “faces” feature of my photo browser, and I’m invited to give them names. With the HDR or panorama feature enabled these people sometimes show their ghostly natures. Unaware of the accidental photographer, these phantom bodies strike inadvertent poses and static attitudes.

Attitude is more important than emotion. As well as suggesting a mental view or opinion, “attitude” suggests a bodily posture, pose, disposition or orientation. To have an attitude to something is simply to orient one’s body in relation to it, often to face it. Without knowing what they may be thinking or feeling, and with no script or background music to set the mood, the silent bodies in these photographs have only their attitudes to tell a story.

A person or thing can have “an attitude,” or simply “attitude” in its own right. A person “with attitude” is opinionated in a way that is unselfconscious. “Attitude” also relates to “cool.” “Attitude” connotes impudence and audacity, presented in a way that is calm, relaxed, unexaggerated, undemonstrative and self possessed. Unaware human subjects in digital photographs are good at displaying accidental cool.

For media theorist Marshall McLuhan hot media such as the radio and books require an active imagination, which is to say the listener or reader has to do some work. They also incite action. Cool media such as the television and comics induce soporific responses (ie make us passive). The high bandwidth and constant flicker and spectacle of movement and imagery induces inaction before the television set. The action is all on the screen so the body doesn’t have to do any work. Such reflections promote the concepts of hot and cool in terms of bodily posture and movement, further developing the play between body attitude and “cool.” By this reading digital photography is probably a cool medium. 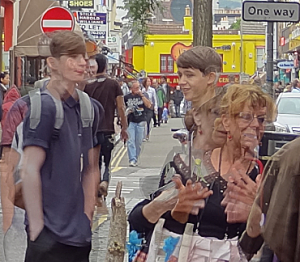 Many people think that art, architecture, music, films and landscapes can inspire, that is, induce a mental state of awe. But the concept of inspiration is really a bodily term. Inspiration pertains to animation, invigoration, arousal, inhaling, and rising to a height. The kinds of things bodies do on cliff tops, readily demonstrated through their incidental representation in digital photographs.

Darwinian diagrams showing progression from walking on all fours to standing upright are “inspirational” in so far as they depict postural transformation. When we see the issue of inspiration as such it transforms the critical language of art and architecture that lays claim to inspirational intent (in Expressionism for example), transforming the exaltation of the sublime to matters of bodily comportment. The question of what makes exultant art, architecture, music, film and landscapes becomes a question of what they do with and to the body.

It’s easiest to think of spaces as having effects on the body. Under the analysis of the philosopher, Michel Foucault, architecture is involved in the objects and practices by which the body is rendered “docile.” Foucault’s famous example is of the Panopticon (as developed in the early 19th century by Jeremy Bentham) as a means of encouraging civilised behaviour among prisoners, where inmates and guards alike apparently behave themselves because they are part of a system of surveillance.

For Foucault, in the modern era, we organise our architecture, and other hardware, to accommodate transformed power relations. Rather than exercise power by inflicting violence, torture or forced restraint on bodies, modern society has developed institutions, practices and architectures that replace the spectacle of violence with other bodily spectacles, well represented by bootcamp drills, classroom behaviour codes, systems of confinement, aerobics, and even handwriting.

Add to these modes of restraint the presence of digital technologies: keyboards, screens, tablets, phones, wearables, implants — paraphernalia of the body as much as the intellect. Also throw in the ubiquity of digital photography. Do we organise our bodies any differently knowing that we might appear unaware and at any time on CCTV or in a stranger’s digital photo album?

The idea of virtual reality also involves attitude, not least in its attempts to find release from the constraints of the body, ecstasis. The metaphors depicting the ephemerality of cyberspace commonly invoke flying, floating through space, rising through layers of enlightenment, as commonly depicted in cyberspace fiction. Is this a futile attempt to get away from the body and its constraints? Such denial of materiality still foregrounds the animal and human body.

Bodies are ever present, gargantuan or Lilliputian, imprinted, frozen, in high definition or blurred, in attitudes cool and occasional, on hard drives, picture galleries, photo sharing sites and blogs. Perhaps this is a reminder that the creative arts could focus less on minds and feelings than on what the arts do to bodies and attitudes.