Who cares about research? Much research in the UK is publicly funded, through grants, university infrastructure and salaries. The latest research exercise (REF) foregrounds the issue of impact. How can research communities demonstrate the value of their research to society at large? There’s economic and social impact, where research leads to better products for the marketplace, competitive advantage, and benefits to health, welfare and prosperity. Impact can be subtle, slow to develop, long term, more the product of a research community than an individual piece of research. In fact it’s all about influence rather than impact. 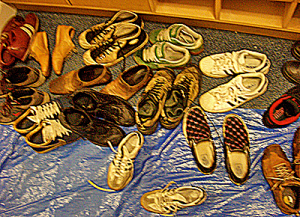 The economic and social influence individuals and groups exert is a qualitative matter, but inevitably leads to a consideration of quantities, and large numbers at that. It’s about audiences en mass: footfall, demonstrably large numbers of readers, visitors, users, consumers and beneficiaries. Research impact is about mass media, the massification of the intellect, or at least it nudges research in that direction.

The emphasis on public accountability under the rubric of impact, combined with the growth in the Internet as a powerful broadcast medium, provides both a challenge and an opportunity in dealing with research and mass audiences.

How does research get noticed? The tools are there for anyone with access to the Internet to publish: messages, comments, articles and whole tomes for everyone to see, to garner feedback, and even construct a network of followers, readers, and fans through social media. You can construct a persona and orchestrate your own publicity machine. All of this operates under the exposure of numbers: page views, hits, visitors, friends, followers, citations, subscribers. Quantities are conspicuously present on the Internet — to be viewed, compared, gloated over, embarrassed about, and provide evidence for influence, reputation and impact, assuming there’s an audience.

Numbers also plunge information into the shadows. What do punters do with information they visit on the Internet … if they do? What is its influence? Over 10.8 million viewers were entertained by The X FactorResults on ITV1 last weekend (BARB), the most often viewed video on YouTube has over 180 million hits (currently Evolution of Dance – By Judson Laipply), the Guardian Newspaper currently averages 232,566 sales per issue (and falling) (ABC), the top-selling book series is the Harry Potter stories (over 45 million according to a wikipedia entry), and the average paper in the life sciences is cited about 6 times  (Maslov and Redner, 2008).

Does each of these media products have comparable intellectual impact or influence, and is the unit of measure the same in each case (1 Harry Potter reader = 1 Guardian reader = 1 reader of a research paper)? Do researchers have to have dual citizenship: scholars and citizen reporters? Do we have to restrict our communications to bite-sized chunks, to trade in unresolved dilemmas and dichotomies, sensationalise the issues, connect to popular topics, gloss over fine distinctions, provoke with unanswerable questions, or float from one topic to another and never settle on a conclusion?