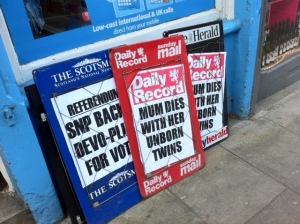 As well as the allusions to death, the “mystery” tag is a major tabloid cliché, not to mention a key element of gossip and scandal, or any narrative for that matter. It’s the gradual unfolding of a story that appeals … whether it’s a mystery story, a fiction about secret societies, or some conspiracy theory. The mood that mystery engenders is of suspicion and not quite knowing what’s at the end of the journey. The sense of mystery is not necessarily diminished when we become aware of its resolution. Reliving, reviewing, and recalling the suspense and the outcome are presumably part of the narrative experience.

A sense of mystery can invoke curiosity, and is a useful tool for educators. If deployed successfully it infuses the ordinary with gravitas, and can enhance the authority of those who purvey the mystery, or who hold the key to its rational explanation.

Mystery can also serve as a mask to occlude the fact that there really is nothing there, or very little. At its worse, the invocation of mystery is a ruse to conceal ignorance and vacuity.

There are many so-called “mystery” traditions and cults with their proponents identified as “mystics.” Christian, Jewish and Arabic mysticism is said to have influenced thinking in the later Middle Ages and the Renaissance, and such influences persist to this day. So-called “Eastern mysticism” is a hallmark of exoticism and otherness. One of the problems with the term “mysticism” is that it aggregates a range of practices, theories, ideas and beliefs that might in fact be very different. It also suggests opacity and elitism.

Traditions such as astrology, alchemy, magic and other practices might variously be equated with early or proto-science. It’s well-known that Robert Boyle (1627-1691) and Isaac Newton (1642–1727), key figures in the development of science, practiced and wrote about alchemy.

Mysticism links what today we might readily dismiss as “charlatanism,” lumped in with pseudo-science, and contemporary New Age thinking. It may even refer simply to a contemplative attitude. Even genuinely radical thinking, and radical strands within mainstream philosophy and theology, get labelled as “mysticism.”

One of the culprits in this confusion of legacies is Hermes Mercurius Trismegistus, a philosopher (or divinity) of indeterminate origin (perhaps ancient Egypt) and the focus of various European mystery cults. The name crops up frequently on Internet searches on the theme of Hermes. Hermes is of course the trickster god of Greek legend, and Mercury is the Roman equivalent. “Trismegistus” means “thrice great,” referring to his status as priest, philosopher and king. As the messenger god, Hermes is strongly associated with the art of interpretation, from which derives the term “hermeneutics,” an academic tradition antithetical to the mystery cults of Hermes Mercurius Trismegistus.

The mysterious figure of Trismegistus on whom is planted the name of Hermes has led to the commonly used word “hermetic,” a word used to describe something that is hidden, exclusive, secretive, locked away and sealed. It’s the latter association that orbits around Hermes Mercurius Trismegistus, the cults of whom trade in mystery stories and oblique symbols. Such cults promote the idea that there is after all much that is hidden from our view, a “higher wisdom,” and there’s an inner circle who have access to this knowledge.

In unpacking these cultures of putative mystery it might be helpful to identify differences in style. There are writers, teachers, and philosophers who resort to short sayings, enigmatic aphorisms, and riddles, as opposed to those committed to lengthy explanation, reasoning of varying kinds, and dialogue. Plato’s Socratic dialogues explore complex ideas from all angles, entertain objections, and do not appeal to an authority other than reason. The so-called Pre-Socratics, delivered terse sayings without such reflection. I would contend that this is a difference in style and format rather than substance. One is no more “mystical” than the other. The terms “mysticism,” “mystical” and “mystic” could usefully be dropped altogether.

Hermeticism, other than as a thread in a ripping yarn, of course runs entirely counter to the overt messages of mainstream intellectual development in philosophy, religion, politics, science and the arts, at least since the Enlightenment, not to mention the study of hermeneutics (interpretation).

There’s no room for hidden wisdom in an open and democratic society that seeks liberty, equality, fraternity (community) … and openness to the power of explanation. Fundamentalism is a subspecies of the hermetic. It purveys the concept of an original and authoritative truth, albeit hidden except to those in the know.

Unfortunately, any intellectual ideas that come across as somehow difficult are too easily bracketed with the mystical. The writings of the philosopher Martin Heidegger provide a case in point. (See previous post.) John Caputo’s excellent book The Mystical Element in Heidegger’s Thought published in 1986 explores the way Heidegger draws on the sayings of Meister Ekhardt (c.1260-c.1327) and Angelus Silesius, (1624-1677) and of course the Pre-Socratics, all of whom have been variously described as belonging to the mystical tradition. Even Heidegger refers to them in this way. Whether or not these sources are “mystical,” they are certainly not hermetic.

To me the main characteristic of such interesting sources is that they turn our dependence on logic as an arbiter of reason into a problem. They worry over the logical excluded middle: that if A is not B then A cannot also be B. They develop their impetus from an apparent contradiction or paradox.

There’s nothing mystical about that. In light of so much 20th century thought, contradiction, paradox, discontinuity and indeterminacy are basically mainstream, not least for artists and designers who are used to the creative potential of the less than obvious, the peculiar in the ordinary, the difficult and the paradoxical.

“Things taken together are whole and not whole, something which is being brought together and brought apart, which is in tune and out of tune …” (Heraclitus Fr. 10, excerpted in Allen, 1985, p.41)

Read about the “mysteries” of the one and the many in fantasy, Surrealism and elsewhere.

According to scholar Stanton Lindon, in contrast to scientific explanation, “alchemical discourse is known above all for its obscurity, it’s deliberate attempts to both reveal and conceal, and — to this end — it’s extravagant use of abstraction, allegory and analogy, and idiosyncratic displays of bizarrely fanciful images, symbols, and riddles.” (p.19) Alchemical discourse has both an esoteric (unintelligible except to the initiated) and exoteric (a doctrine as presented by the initiates to the external public) aspect.