Four years ago when excitement about the 3D role-playing environment SecondLife was in full frenzy, a group of us constructed a playground promontory on the edge of the University’s main island. We built walls that changed their surface patterns and moved about in response to signals from mobile phones (in physical life). It was a favela of virtual pop-up architecture. 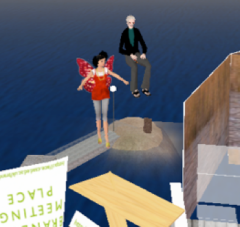 I recall another department who occupied the adjoining land complained about our mess. They erected a big wall so we wouldn’t be seen. Anyway, I returned a few years later. The whole island was a bit of a graveyard even at its peak. But the contents of our open air laboratory had decayed. Some of those folding walls had folded into the sea, or were suspended in thin virtual air. Other forms and fragments were strewn across our plot. Whether by neglect or malice, we were laid waste.

This is one of the few cases where data waste is analogous to waste in physical life. In an illuminating article about physical waste in derelict industrial sites, geographer Tim Edensor notes: “As things decay they lose their status as separate objects, fragmenting and dissolving as discrete entities, becoming part of the soil or absorbed into non-human bodies” (p.320).

These are the bits of rusting machinery, office furniture, discarded personal effects, oily tins, crockery, torn posters, redundant signage, old magazines, and other random industrial and recreational remnants now piled, strewn, exposed and rotting in arbitrary relationships one to the other.

Edensor elaborates: “Positioned in these new locations, objects become unfamiliar and enigmatic, they contravene our usual sense of perspective, rebuke the way things are supposed to assume a position in regimented linearity or are separated from each other at appropriate distances” (p.321). This “accidental surrealism” of waste and ruin challenges our ordered understanding of object, function, value and presentation.

If this is the character of physical waste, what about data detritus? Perhaps its inability to decay elegantly is what distinguishes data from everything else. Bits and bytes don’t tend to degrade smoothly. A few bits out of place can corrupt a whole data set. It’s a brittle medium without those soft material edges that fray or get colonised gradually by mould, or leached by ground water. Malware doesn’t add patina.

Perhaps we would rather that data fade away with time, like very old photographs, and eventually return to earth. As long as there’s a storage medium and a data reader, digital matter is hard to get rid of. Who will purge our hard drives after we are gone?

I prefer to think of the possibility that data already has the character of waste, at least as described by Edensor. Data is already “matter out of place.” Returning to SecondLife, or what’s left of it — even though its creators supposed SecondLife to be as “real” as the physical — with added features (it supported flying, mind over matter, action at a distance) — it couldn’t help but present as an exercise in “accidental surrealism.” It’s strange without a doubt. But then all digital presentations are strange. Think of CGI in this light. Familiarity is the unusual feature, emerging less than occasionally from the entropy and noise of data. 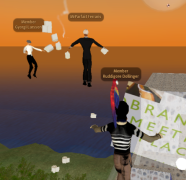