It’s old news now, but Prime Minister David Cameron was asked on a late night US tv show if he knew what Magna Carta meant in English. He didn’t and had to bluff (Guardian). An acquaintance told me about an overseas visitor who thought that Magna Carter was the lady in the green dress in the Bodleian Library pointing at an old document. This is an easy mistake as the document is usually referred to without the definite article.

On the subject of David Cameron’s lapse, London Mayor Boris Johnson said that Cameron was only feigning ignorance so as not to appear too comfortable with Latin, which would draw attention to his credentials as an old Etonian, an elite status shared by both Cameron and Johnson (Guardian article). It seems that people do compete to appear ordinary. 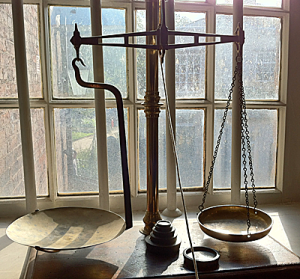 Magna Carta was formulated to curb the arbitrary will of despotic kings, and as such served as a prototype for the declarations and constitutions of the Enlightenment that followed many years later. It contains the mere whiff of what we regard today as liberty, with only oblique reference to the eradication of ignorance. It says that judges and other officials must at least know the law, and no one can be put on trial without credible witnesses (testibus fidelibus). The idea of sound evidence lurks within the text.

Magna Carta is available online, complete with histories, anecdotes, and the “credible witness” of over 6 million mentions on web pages (according to a Google search). As long as you’re able to get online, it’s easy to feign knowledgeability — and even to throw in a bit of Latin.

But as long as you are at a keyboard and on line it’s getting harder to pretend ignorance. By that I mean unless you are extemporising and away from a computer, it’s hard not to know your facts, and it’s hard to pretend you don’t know. Ignorance is barely an excuse. In the age of the Internet, ignorance becomes an empty signifier.

A history of ignorance

Skeptics question constantly and claim rhetorical superiority by unsettling their adversaries. Skepticism is a trait of which the philosopher Plato accused his opponents, and even practiced himself. To claim that no one can ever know the truth and to unsettle any truth claims, are time honoured rhetorical strategies. Ignorance keeps us on our toes.

Rene Descartes began his famous philosophical journey with the proposition that the only truth of which he could be certain was his own doubt. What is it that doubts, or thinks doubtfully? The self. “I think therefore I am.”

Immanuel Kant wrote about “things in themselves,” independently of how we sense them. This is the noumena, which turns out to be unknowable — a substrate of unknowable reality, the way things really are, according to some interpreters of Kant.

Then there are the Agnostics, a term coined by Thomas Huxley in the nineteenth century to describe his position about religion. You really cannot know if God exists.

The twentieth century Logical Positivists observed that people make certain assertions about God, spirit, deep and invisible underlying truths, that are not only unsupportable, but meaningless, as there is no way of verifying their truth or falsity. The metaphysical is thus beyond reason, and therefore unreasonable, and we can’t discuss it sensibly. Ludwig Wittgenstein said at the end of his Tractatus, “That about which we cannot speak we must remain silent.”

Thomas Huxley makes a reference to the condition in Scottish law in which a verdict of guilt or innocence is not possible. The case is not proven — a verdict that carries certain consequences, including the possibility that the case gets reopened at a later date as more evidence comes to light.

That’s handy as it suggests a deferral of truth, a condition that characterises Jacques Derrida’s take on “ignorance,” his play on the idea of difference, which looks a bit like deferral in French. So he invents the word différance. In fact a documentary of Derrida’s later life includes a charming anecdote. Derrida’s mother overheard a conversation between Derrida and his admirers about his interesting and infamous formulation of the concept of différance. She was taken aback: “You mean you spelt difference with an a!”

Some other kind of ignorance

Ignorance can be a force for positive intellectual development, but we still need a term for the bad kind of ignorance that none of Magna Carta’s descendants could comfortably endorse, ignorance of the kind many want to ascribe to the rogue cleric Abu Hamza for example. We would have to qualify that kind of ignorance with blind, bog, pig or plebeian, were it not that such adjectives also insult someone or something other than the target.

The term “extremely prejudiced” is helpful, but hermeneutical scholars point out that the ability to pre-judge is vital before we can develop any kind of understanding or evaluation of anything — a text, a law, a legal case, a work of art. For the bad kind of prejudice, think of the hermeneutical investigation that stops with a prejudgement and is closed to revision, challenge, and renewal, as if all is now decided and beyond dispute. That’s the worse kind of ignorance.

The problem is not how to deal with those people who don’t know very much, but with those who don’t want to know more — those who seem incapable of succumbing to curiosity, or have already circumscribed what they are prepared to be curious about. Perhaps that’s the kind of ignorance that requires our attention — or sympathy.

Drawing on Hans Georg-Gadamer, the philosopher Richard Bernstein affirms, “To risk and test our prejudices is a constant task (not a final achievement)” (p.129) — the positive perpetuation of a state of sublime ignorance.