Jackals are omnivores. They eat plants and hunt small prey. Jackals normally forage and hunt singly or in pairs, but will form larger alliances to scavenge a carcass. By stealth, they will steal from a lion. 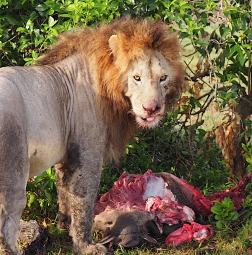 A lion, three jackals and a dead warthog

A female lion catches a warthog in the early morning. Warthogs have large tusks and are not the usual target. The lioness’s mate chases the lioness away and gorges himself on the kill.

We caught the drama as the lion crunched on the carcass secreted within prairie scrub. Three light footed jackals also yipped around the scrub. The lion leaves the carcass to relieve himself, or perhaps in need of a drink. Out of habit he claims the bushes with his scent and sits in the clearing.

The jackals are quick and extract the organs from the carcass. They scatter as the lion returns. The lion picks up the carcass and heads towards another bush, stopping every 30 metres to recover, followed by a persistent but wary jackal.

Our guide said the lion was looking for a bigger area of scrub to rest away from the sun as the day gets warmer. Guides know where the prides hang out. The lion was probably retreating to such a “lair.” The video below illustrates the contest.

Jackals have come to symbolise the triumph of brains over brawn. Their cunning outmanoeuvres even the king of the beasts. The jackal is amongst a range of animals that story-tellers and scholars identify with the trickster. I’ve learned a lot about the trickster. He crops up in several of my publications and blog posts.

It’s common for folktales to conflate the animal with the human bearing the trickster traits. Anthropologist J. D. Lewis-Williams recounts a story about a jackal and a lion from the Khoisan people of South Africa. There are several variants, but one has an architectural aspect.

The trickster and the tower

A jackal builds a stone tower to give himself a vantage point for spotting game. The lion comes to the base of the tower and the jackal offers to haul him up by a leather strap so he can eat with the jackals. They try this three times but each time the jackal cuts the strap and the lion falls to the ground.

Then the jackal tells his wife to wrap a hot stone in fat. The jackal drops that down into the lion’s mouth. I think that’s the end of the lion. 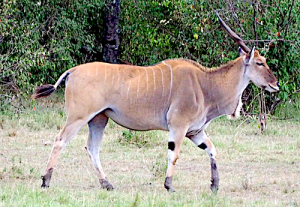 There’s a build up to this scenario. The eland is a prized member of the antelope family. The jackal and the lion are hunting an eland with bow and arrow. They each shoot their arrow. The jackal hits and wounds the eland. The lion misses it. Then follows a dispute over who gets to consume the wounded animal.

To abbreviate the story, the jackal is able to feed the best part of the eland (the fat) to his family, but the lion’s family has to make do with the lungs.

On being above ground

There’s a nice confluence in this savage story between the trickster function, vertigo, deception, the lure, refuge and entrapment about which I’ll try to say more next time. I’ll just note at this stage how helpful it is to have access to a refuge above ground when on the savanna — if not a stone tower, then at least a jeep, or a treehouse.