It’s easy to get carried away with words, either written or spoken, especially if you’re good at stringing them together. I was reminded of this propensity at the Edinburgh Fringe Festival, with its programme category “Spoken Word,” indicating entertainments in which amusing writers like David Sedaris stand up and talk, and others sit and listen for an hour and a half.

The philosopher Jacques Derrida knew how mesmerising words could be, and was practiced in so using them. His clever essay “Plato’s Pharmacy” is  a commentary on Plato’s Phaedrus, a dialogue between Socrates, Plato’s teacher, and a young pupil, Phaedrus. On the face of it, the Platonic dialogue is about the exercise of true wisdom, through reason, against the shallow and beguiling rhetorical strategies of the Sophists, with their appeal to myths and persuasive trickery. But Derrida takes a different tack from the orthodox commentators, and concentrates instead on a passage in Phaedrus recounting a myth of the origin of writing, and writing as a drug. Here’s the problem with writing things down, according to Plato’s mythical dialogue.

It will atrophy people’s memories. Trust in writing will make them remember things by relying on marks made by others, from outside themselves, not on their own inner resources, and so writing will make the things they have learnt disappear from their minds. Your invention is a potion for jogging the memory, not for remembering. You provide your students with the appearance of intelligence, not real intelligence. Because your students will be widely read, though without contact with a teacher, they will seem to be men of wide knowledge, when they will usually be ignorant (Plato, Phaedrus 275a).

This is a bit like advising students not to take notes in class (and for stand-ups to extemporise rather than read from a script). So dating back as far as Plato, the philosophical literature is suspicious of the power of the written word, and harbours a nostalgia for pre-literate society: when people only spoke, without writing things down — they extemporised, or committed their speeches to memory.

Derrida titles his essay on Phaedrus “Plato’s Pharmacy” in response to the term potion. Derrida makes much of this small word rendered by different translators of Phaedrus as “medicine,” “antidote,” “drug” and “poison.” It seems that the original Greek word, pharmakon, can be translated either as something that cures or that to the contrary makes you unwell, an ambiguity that appears reasonable as early medical practice was at best a risky business.

One of the variant forms is pharmakeus, which also relates to a magician (a dispenser of spells),  a scapegoat, and a parasite. The Athenians apparently kept outcasts (some of whom claimed to be magicians) within their midst so that they could be sacrificed to the gods when something calamitous happened, such as a plague or siege. Pharmakon also means colour according to Derrida. It’s the cosmetic used to make corpses presentable prior to burial. (So there are several connections here with the theatrical.) Derrida’s strategy is to show through various examples, intertextual connections and traces, how scholars treat writing as if it were something toxic. He then indicates how such scholars contradict themselves when they think of writing in this purely negative way.

Turning words inside out

Derrida observes that in order to describe the superior qualities of speech Plato has to resort to the metaphor of words as “written in the soul.” It seems that it’s always necessary to describe what is good, the privileged entity in an opposition (speech over writing in this case) by appealing to the superiority of the lesser term (in this case writing).

Writing in the soul is therefore a kind of proto-writing, a more basic and primordial written entity, but writing none-the-less. So Derrida’s argument begins with the distinction between speech, the privileged term, against writing, the denigrated or supplemental term. He shows that in the very texts that assert this difference and priority, the tables can be turned. Speech in fact depends on what we understand as writing. In more general terms it seems that the centre depends on the periphery. In linguistic terms meaning (the signified) depends on the circulation of signifiers. The speech/writing distinction is therefore not just an oddity, or an example amongst others of the quirkiness of language, but touches on the core of what it is to claim access to meaning and truth.

Derrida’s observations about language still resonate with and have inspired architects, critics and theorists. One of the main outcomes of Derrida for architecture is to re-assert, or at least to wrestle with, architecture’s material characteristics over its ideologies, to treat architecture, and to theorise architecture, by considering how ordinary it is — its textures, plumbing, specificity, and its everydayness in social and urban contexts: its potions, poisons, paints and parasites.

Another way to look at the implications for architecture is to think of what a reading of Derrida displaces from architectural discourse, or at least how it turns certain concepts we take for granted into problems: concepts such as authenticity, original meanings, intentions, higher meanings, deeper meanings, fundamentals, the essential, the essence of architecture, architecture as a medium for expressing the spirit of an age, architecture as an expression of the intentions of the designer, drawings and models as representations of the ideas of the designer, the spirit of place, origins, concepts of genius, objectivity, subjectivity, and theory as a foundation for practice. In other words it stops architecture taking itself too seriously.

There’s also something about design in the way Derrida deals with words, the associations between words, and letting them carry us along: antidote, potion, scapegoat, colour, sacrifice. Design is after all abetted by the ability to string things together, to see significance in the marginal, and to emerge intoxicated from a flood of unlikely and improbable associations.

In a way, Derrida is describing what stand-ups and entertainers operating within the genre of the “Spoken Word” do. They string out unlikely associations: house-hunting in Paris, contemplating a whorehouse, going to Amsterdam, falling in love with Anne Frank’s house, wanting to knock down a wall (New Yorker). 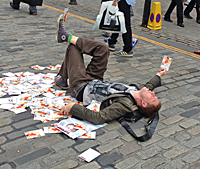