The Scottish Forestry Commission has produced a series of reports outlining why it’s good to get out into forests and green space: “There is a strengthening body of evidence to support the view that greenspace and woodlands provide the ideal setting to promote health and physical activity.” 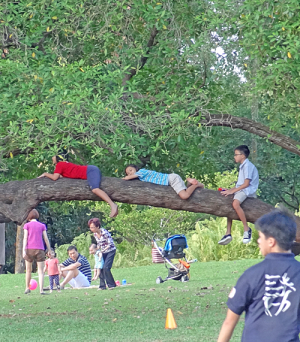 In many respects it’s an easy message to sell, and its easy to find supporting evidence, particularly as researchers tend to look for confirmation of a proposition they want to support, rather than the converse. We repress the obvious disbenefits of being outdoors.

I don’t think I need to be reminded about UV from the sun, bush fires, predators, perishing cold, searing heat, getting lost, mugged, or flooded. There are good reasons to stay indoors.

In fact homo sapiens are happy to step outside when it’s safe and sunny and retreat back into the shelter when darkness falls, or the weather gets unpleasant.

For the hunter and the hunted the edge provides cover. Species compete for the advantages provided by the edge condition, the threshold between open space and enclosure. It’s the site of biodiversity.

Perhaps that’s why we construct parks and gardens. What is a park but a series of controlled edges? I think it’s not the untamed outdoors but the controlled and manicured world of the garden that epitomises safety, well-being, and health for the human species.

In a seminal study into exercise and the placebo effect a group of hotel cleaners were told their daily routine met all their exercise needs for health and wellbeing. Their psychological and physiological health was later measured to be higher than that of a control group doing the same work who were not told their daily routine was good for them. The authors of the study, Alia Crum and Ellen Langer, found that compared with the control group, the group primed with the idea that cleaning and making beds was good exercise “showed a decrease in weight, blood pressure, body fat, waist-to-hip ratio, and body mass index.” The authors assert: “These results support the hypothesis that exercise affects health in part or in whole via the placebo effect.”

I’ve yet to find a study that says something similar about being outdoors, but there’s a chance that if you believe in something then that whole frame of expectations will have an effect (positive or negative). Here I think studies in the humanities have more to say than the sciences about this frame of expectations that influences what happens between mind, body and environment.

Revenge of the humanities

The Forestry Commission Reports provide a good test case for the relationship between the humanities and the sciences. Much of my research practice, which is to say my own writing, as well as reviewing, designing and supervising research projects, spans across the humanities and empirically oriented evidence gathering — the stuff of science. Thinking about natural environments brings to light the primary role of the humanities.

Interpretation is the mode of understanding championed by the humanities. I’m even prepared to say interpretation provides the foundation of scientific observation.

Researchers seek evidence for the health benefits of being outdoors thanks to the wealth of cultural affirmations supporting people’s affinity with gardens: e.g. the Garden of Eden, and the myth of the Primitive Hut, the first dwelling fashioned out of the trunks of trees. At the same time, any experienced, perceived, reported, or measured health benefits to individuals are moderated, if not determined, by cultural factors (the subject domain of the humanities).

It’s tempting to say therefore that what we observe about nature is a product of cultural conditioning, as if we need to see past such predilections and prejudices, taking nature as it is. But we could also say that there’s really nothing other than the world as we understand it. The world is a garden after all. See What does it all mean.