In a recent experiment into green landscapes and their salutogenic (health giving) potential (led by colleague Jenny Roe), we presented people with a range of images of urban and green space — dry images deliberately selected without “blue space” (i.e. water).

Such is homo sapiens‘ powerful affinity with life-giving water, we thought its presence would overwhelm any other positive, health-inducing factors in the environment. After all, people pay a lot of money for real estate with water views.

Water’s presence, absence and transformations also impinge on the political landscape. For example, they identify how climate change is “immediately tangible through the volatility of weather patterns and the intensity of floods, hurricanes, tsunamis, and droughts.” They think that at the “scale of acidifying oceans, changed currents, wetland encroachment, and desertification, we are also part of watery transformations.”

I’ve observed that even when contained, partitioned, standardised, purified, and turned into a measured and consistent medium with chemicals added and controlled temperature, water’s power as a medium for the emotions trickles through.

Stripped of many of water’s signifying dimensions, an olympic standard swimming pool evokes mixed emotions of triumph, fear, exertion, health, restoration, exhaustion, exposure, embarrassment and pleasure. Here are some images from the sensuously formed Olympic Aquatic Centre by Zaha Hadid, the icy depths of which were opened to the public last weekend. 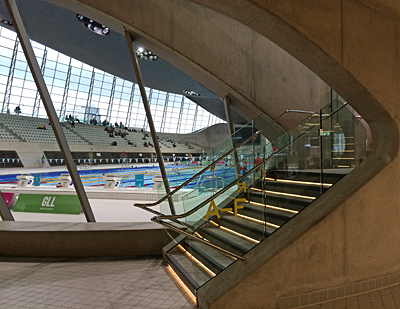 The authors of Thinking with Water emphasise our dependence on watery metaphors. They argue eloquently that:

Many fundamental concepts and ideas would be unthinkable without a language of flow, circulation, and depth. In everyday speech, emotions ‘flood,’ ‘bubble up,’ and ‘surge’; a ‘dry’ text is one that lacks feeling and passion. We ‘freeze up’ with stage fright, join or diverge from ‘mainstream’ populations. Money ‘circulates’; commodities ‘flood’ the market. The past is a ‘depth’ and time ‘evaporates.’ Neither is the realm of theory immune to inspiration from the liquid world: aqueous dynamics of ‘flux’ and ‘flow’ characterize qualities of indeterminacy and continuous change within many contemporary epistemologies, while feminist concepts of ‘leakiness’ and ‘seepage’ have been mobilized to identify crucial porosities in bodies and theories alike.

This is thinking with water: “Just as water animates our bodies and economies, so it also permeates the ways we think.” No wonder it affects our responses to landscapes. 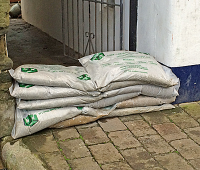