It’s impossible to fail utterly. Years ago, before they were usual practice, a colleague and I organised a postgraduate recruitment open day for our department. It was a great innovation, with a substantial turnout of staff. The five or so potential applicants who appeared included a boy still at school, a couple inquiring on behalf of a grandchild, and several other adults without the necessary entry qualifications.

The benefit for the colleague and me of the appalling turnout was that afterwards we could boast about the “utter failure” of the event. The failure rested entirely on our shoulders, which we bore with mirth, and for which we garnered no small measure of cachet within the department.

At the time we were probably both reading a best selling self help book by Manuel Smith on assertiveness. I think we were over-exercising a kind of pre-emptive “fogging,” agreeing with something in what your critic says, or might say. (Critic: I see you are dressed in your usual sloppy way. Answer: That’s right. I am dressed in my usual way.) 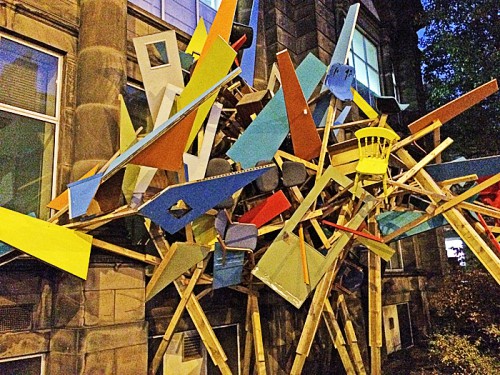 To fail at something, due to bad planning or some other cause, is a kind of loss, and any persistent melancholia afterwards is a kind of grief over loss of esteem, that bit of yourself invested in the project.

Jacques Derrida identifies the paradigm case of unsuccessful failure in the much more serious domain of grieving over the death of a loved one: “Faithful mourning of the other must fail to succeed / by succeeding (it fails, precisely, if it succeeds! it fails because of success!)” (321). Through this tortured syntax from an edited interview, and a helpful explanation by Penelope Deutscher, one identifies Derrida’s usual tactic of highlighting the paradox endemic in any taken-for-granted opposition.

In this case the target is Freud’s identification of the regular, healthy grieving process, and the more unresolved, covert and persistent depression (melancholia) that afflicts those who never really recognise what it is they’ve lost — probably that part of themselves that was invested in the other person. (See Good morning melancholia.)

For Derrida, via Deutscher, failing to grieve adequately usually suggests lack of respect for the one who’s died. But for Derrida, really feeling the grief, identifying with the loved one, amounts to taking over the person you’ve lost as if part of yourself: “mourning is an unfaithful fidelity if it succeeds in interiorizing the other ideally in me, that is, in not respecting his or her infinite exteriority” (321). Successful grieving fails to respect the individuality and “otherness” of the person for whom you grieve. He even attaches to this supposedly virtuous position of good grieving the appellation “cannibalism.” That can’t be a good thing.

Other than scoring points against Freud, i.e. indicating flaws in the logic of Freud’s argument about mourning and melancholy, it’s hard to see therapeutic value in Derrida’s approach to grief. But cascading down from the abstract philosophy of grieving we find permission for the glib assertions that there’s joy in melancholy, there can be success in failure, and you can learn from your mistakes. There’s also permission to recognise the ambiguity in one’s own grief when it occurs.