It’s tempting to think of the natural world as a casualty of sophisticated communications technologies. Everywhere, always-on networked phones and computers diminish spatial demarcation, and threaten the uniqueness and placeness of natural environments. In their 1998 book Contested Natures, sociologists Phil Macnaghten and John Urry draw on various sources to argue the converse.

“As spatial barriers diminish, so we become more sensitized to what different places in the world actually contain. Moreover, there is increasing competition between places to present themselves as attractive to potential investors, employers, tourists, and so on, to promote themselves, to sell themselves as service–, skill– and nature-rich places” (140). 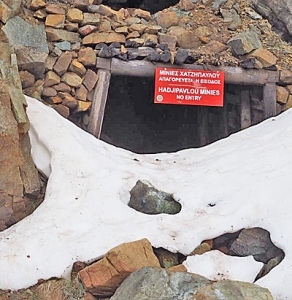 So even an instrumentalized, economic materialism tends to bring the natural into awareness — and even to create the natural, via difference.

On the first page of their introduction (accessible via Amazon preview), Macnaghten and Urry provide a stark account of the diverse ways in which nature presents to us. They want to show that there’s no single uncontestable nature independent of the way people study, use, debate and negotiate it. They position themselves against 3 conventional ways that scholars think of nature.

In contrast to these positions theirs is sociological, cultural and pragmatic, asserting the crucial place of discursively contested social practices. Their approach advocates the importance of

This is my own paraphrasing. Their main contention, with which they lead in their first sentence, is that “there is no singular ‘nature’ as such, only a diversity of contested natures; and that each such nature is constituted through a variety of socio-cultural processes from which such natures cannot be plausibly separated” (1).

They wrote this book in the 1990s. I think networked digital technologies now intersect each of these themes in interesting ways. People talk about, represent and reflect on the natural through a diverse range of everyday digital media — not least digital photography, video, ad hoc travelogues in social media, navigation tools, etc. I like to think of nature reconfigured via these media, rather than diminished — or enhanced.

Digitally moderated encounters with the natural represent bodies in relation to nature in some new ways. Think of how people put themselves in the picture when filming nature scenes. With a smartphone you can be in a local situation, but at the same time accessing information, posting commentary on Facebook, and in other ways playing around with the spatiality of where you are.

As well as obviating some of the time constraints of travel and communication, networked digital devices influence recollection, anticipation and planning. Via itineraries and other organisational tools they feature in the way we order the day, the outing, as well as recording, monitoring, and way finding — or getting lost.

I like to think that digital networks are complicit in configuring and reconfiguring sets of relationships that constitute the natural. Here’s an example from my own attempt to document a walk in the mountain region of Cyprus a few weeks ago.

Such representations throw up differences. The video is nothing like being there, but might just emphasise aspects of the experience that otherwise go unnoticed — and occlude others. I posted a lighter version of the video on Facebook, and it provoked the following charitable exchange. 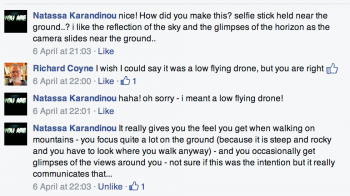 The exercise could also have been a distraction for me, the walker, but it didn’t take up much of the 6 hour journey around Mount Olympus. Recording the video was unpremeditated, though I had done it before in other contexts. At one stage we shoved my iPhone into a hole, hoping to see a snake. I recorded something rearing up ready to strike, but it might have been a tree root. Around the time I took the video selfie we realised we had taken the wrong path, encountered the wrong mine as described in the guidebook, discovered there was not enough detail in the iPhone map application to recover, and had to backtrack.