“Frustration” is the watchword of those at sea with computers. Cumbersome fingers swiping across overly sensitive tablet screens shut down the mail app before the message is finished, windows appear or disappear as if at random, and there are all those irrelevant pop-up messages, obtuse instructions and uninvited features. The physical environment invokes similar frustrations. 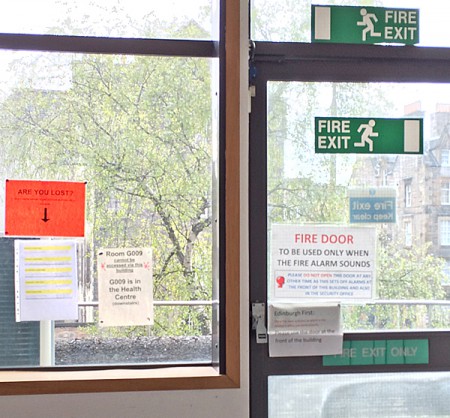 You know that the architecture of a space has failed when signs are brought in to make clear what should be obvious from the way the space, its hardware and furniture have been designed. The signs are a palliative to frustration, but can also amplify it.

I’m thinking about frustration as it’s one of the parameters picked up by the Emotiv Epoc EEG headset designed to monitor a game player’s responses to events in a video game. We are using the same technology to assess people’s responses to outdoor environments. Frustration seems to loom large in the readings, and follows patterns that are difficult to predict.

According to the psychological literature, frustration is a feeling that arises when your ambitions towards a particular goal are blocked. The passage out of the building is impeded by a fire alarm warning sign, you can’t save the file as the server is no longer online, you can’t access your email as the wifi won’t connect — that kind of thing.

And of course there are those more pronounced and long lasting frustrations where life goals get blocked. According to Freud, impediments in the psychosexual development of the young child can manifest themselves as disturbances later in life, which to me suggests that a case can be made for the persistence of frustration as a human condition. It’s presumably an enabler and not entirely to be eradicated, even if we could remove it.

As with most (if not all) of the emotions, frustration has its seeds in an undeniable affect, a raw feeling, prompted by various circumstances, and on to which we overlay explanations and culturally nuanced stories. For some of us, for some of the time, the emotion could be one of excitement, disgust, fright, or guilt, depending on the appropriate framework in which the issue is being dealt with, resolved, excused or explained. It’s common enough to describe the situation of being lost as one of excitement infused with fear, and a little bit of guilt. Perhaps frustration is all of the above.

Guilt is a worthy confounder. I’m fond of Mark Augé’s characterisation of non-place, ably illustrated in the case of the confusion of signs around a fire escape. It’s a frustrating place to be, but there’s also a suspicion that I shouldn’t really be there at all. See blog post no-way logo.

Here’s another presentation of frustration, with some resolution. I recorded it this week.