Ethical sensitivity is best cultivated through examples. To test this proposition I ran a class in which ethical matters were addressed through a series of contemporary case studies. There were 50 masters students in the class. Before the students broke into their groups to discuss the case studies I asked them all some simple binary questions, each with a third choice, “I prefer not to say.”

These responses were recorded and transmitted anonymously via the students’ own smartphones and laptops using the educational software Top Hat (tophat.com) that records and collates the results of class quizzes, surveys — that kind of thing.

After the groups discussed and reported on the case studies, I asked them the same binary ethical questions with which I began to see if there was any change. If there was a reduction in the indecisive response (“I prefer not to say”) to the original question, and/or a significant difference in the binary responses, then we might assume that the case studies and their discussion had an effect, or at least an effect that could be picked up over a short time frame. (Of course, as every educator knows, the value of any pedagogical experience doesn’t depend on such instant measurement.)

This was a very informal study, and at best is on the way to developing a method for detecting short term transformations in ethical awareness, and testing the software and this particular use of it. 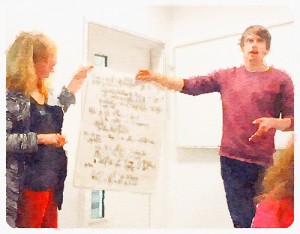 The case studies were designed to encourage the students to put themselves in challenging ethical circumstance, rather than consider ethical questions from a distance. Eleven cases included simple narratives on several themes, and included variants and questions that probed the narratives. There were eleven groups, with one case study per group, but the case discussions were extended as the groups presented their findings to larger groups.

The opening questions included a warm up to test everyone was logged on to the Top Hat survey app, to practice using the system, and as a control question.

Were I to pursue this method then I would have to think about repeating the experiment with different groups, comparisons with a control group who spent the same time doing something other than discussing ethical case studies – and many other refinements.

So an in depth discussion of ethical case studies in a class context resulted in a marginal increase in preferences for strawberry ice-cream! There’s as much support for that proposition as for any shift in moral compass. Students didn’t really budge on the question of whether it’s ok to accept pirated movies. I thought they might.

Responses to the ice-cream question indicate that variations to the ethical questions are just noise in the data. The study may also demonstrate that in a survey context people tend to stay with their initial predisposition, whatever happens. Only time, extended discussion, and a slow fusion of horizons budges people from their “prejudices” — if indeed there needs to be any movement in the case of intractable ethical conundrums.

In the case of pirated files, whatever laws are invoked to protect producers and consumers, many people harbour the view that if it’s online it should be free. 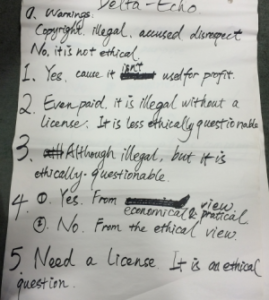