I’ve just caught up with Thunderbirds Are Go, the recent remake of the futuristic 1960s Thunderbirds marionette series. This new series meshes CGI models of puppet-like humans with physical models of rockets, cars, roads islands and cities. So it’s very high tech (from Weta) made to look like tech from 50 years ago. 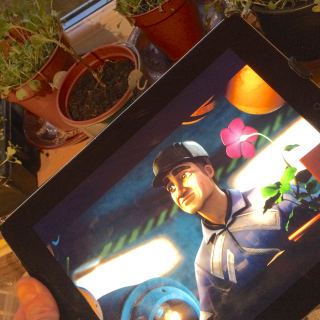 The CGI puppets with their plastic complexions and rigid hairdos are more agile than the originals, and the “marionettes” can walk through doorways, but the trees still shudder when the runway for Thunderbird 2 cleaves open on Tracy Island, and the launch ramp shakes just enough during takeoff. The future setting of the series is still 2060.

In one of the episodes (Slingshot) a lone space mining engineer working on a comet keeps a single flowering pot plant as a pet that he names Gladys. The plant also acts like a canary down a mine. It starts to wilt as the comet gets dangerously close to the sun.

Plants in pots are an interesting visual trope for nostalgic futures, though in Wall-e the plant is in a boot.

Mark Shepard’s book Sentient Cities includes a chapter on a project involving domestic plants wired up to a powerpoint to monitor power usage. The socket will only deliver power to a desk lamp if the carbon footprint of the power consumption is offset by the plant’s capacity to absorb carbon dioxide. The plant is here used as a “natural fuse” (65).

Many power-plus-plant units are networked together, so they can compensate for each other, and there are override switches if you really need power in spite of the carbon footprint deficit/surplus. The system can also even out power distribution and punish poor power usage by dispensing vinegar to some of the plants in order to kill them (the plants):

“If people cooperate on energy expenditure, then the plants will thrive (and everyone may use more energy); but if they don’t, then the network begins to kill plants, thus diminishing the network’s electrical capacity” (66).

The project acts as a carefully documented exhibition piece that serves at the very least as a provocation and a reminder of the fragility of the carbon ecology. I’m also interested in the strange nostalgia invoked by arrays of plant specimens and their connection with electricity, though in this case not as power generators. There are many ways that sentient technologies deal with time.

The issue with the uncompleted RMIT Design Hub solar panels mentioned in my last post on smart surfaces raises the issue of rapid obsolescence. In her 2006 catalogue of responsive environments, Lucy Bullivant contrasts the longevity of buildings with the transience of ever-improving technologies such as display screens. The developers responsible for the display surfaces on the Graz Kunsthaus “see the relative coarseness and monochromacity of the visuals as an advantageous limitation, for new technology of large screens ages extremely fast, and this solution saves constant upgrading and costs” (24).

Of course, technologies don’t improve and develop themselves. It’s teams of designers building on resources provided by others operating in commercial contexts, subject to successes and failures that keep things moving. We call this evolution, a term that belongs to the social world before it became a byword in biology.

Bullivant also notes “the languid days of the late 1980s, when Microsoft founder Bill Gates revealed that his apartment in Seattle had artworks on the walls that transformed themselves at the touches of buttons” (118). I remember reading that as well in The Road Ahead, and thinking at the time who would want that? It’s not even there on Tracy Island. Now we have reasonably priced technology for it I’ve not seen screens hung on walls like paintings that change, except perhaps in Harry Potter films.

It’s obviously hard to predict what will catch on, and the pace of development. So many futuristic projects and aspirations are of historical interest now, and we even feel nostalgic about them. Bullivant describes the idea of a remote home project by Tobi Schneider. It’s an installation provoking the idea of “an apartment that connects homes in two countries at the same time, its floor space distributed over two cities and stitched together by digital networks. It responds to changing cultures of living and the rise of distant relationships” (116).

In this distance living scenario, furniture items such as benches and lamps exchange impressions of the apartments’ inhabitants, so that the occupants get a sense of the other person’s distant presence, i.e. through tangible and sensual interfaces involving pressure, light, ambient music and movement.

Bullivant’s book came out in 2006. In the intervening years questions about sociability, proximity and intimacy have been recast in terms of social media, mobile smartphones and video communications. The idea of the remote home appears quaint now, and cumbersome, and in another ten years commentators may say something similar about social media, mobile smartphones and video comms. In Thunderbirds Are Go collaborators in the 2060s communicate via fuzzy holographic projections, but even that looks a bit out of date as an imaginary concept. Think of the first Star Wars (1977).

But through this tech nostalgia there’s a series of questions about permanence and change. For all their dynamism and putative growth and development, synthetic systems refuse to engage fully in the cycles of life. They become obsolete, dismantled, sometimes with parts recycled, and eventually occupy landfill. Unlike trees, animals, humans and other organisms, cables, sensors, distribution hubs, file stores and transmitters don’t return to the earth and decay gracefully. As everyone knows, their manufacture, use and disposal contribute to imbalances in the carbon cycle.