Many video games require the player to investigate and solve mysteries, to read the signs, gather evidence and follow leads. I think this is the area in which semiotics can be applied most usefully to computer gaming and game design.

Most of us working in architecture and the arts are exposed to semiotic theories via the work of the Swiss linguist Ferdinand de Saussure (1857-1913), from whom derived Structuralism and Poststructuralism.

The US philosopher Charles Sanders Peirce (1839–1914) was a contemporary of Saussure. He developed his own extensive theory of signs, but Peirce and Saussure were unaware of each other’s work.

Peirce said little about play, though he addressed creativity, from which we can make certain inferences about play, and hence computer gaming. Peirce’s extensive published writings certainly lack the literary colour of his Pragmatic followers, such as William James and John Dewey, and there’s something about Peirce’s insistence on organised categories that dulls the sense of play or adventure — for this reader at least.

As a theorist of communication, Peirce makes much of the issue of interpretation. But contrary to Peirce or Saussure, and from a different tradition (Phenomenology), Hans-Georg Gadamer makes play a central motif of his explanation of interpretation. See post: Play anywhere.

For me the most compelling and game-like aspect of Peirce’s insight is the identification of the indeterminate process by which we derive one sign from another. As I’ve explored elsewhere he calls the most creative aspect of this process abduction. See Internet as evidence.

Abduction is a process of reasoning where the interpreter exercises creativity. Here I draw on a helpful book by Douglas Anderson, Creativity and the Philosophy of C.S. Peirce. Peirce explains the creative process in terms of Aristotelian logic. Following the format of the syllogism, the usual deductive process goes like this.

But abduction takes a leap of faith following a formula something like.

Of course, the white beans could be from somewhere else entirely. Deviating from the strictures of the syllogism, it’s likely that there are many possible rules in operation. There could be many different bags available with different coloured beans and in different colour combinations, and the results observed may be varied and ambiguous.

So knowing which beans come from which bags will involve some investigation, the gathering of evidence, and weighing up the likelihood of different propositions. This is the nature of detective work, medical diagnosis, scientific discovery and most interpretive tasks requiring skill. It’s also the nature of much gaming, including puzzle solving, mystery games, chess and poker. Abduction captures this process nicely.

Abduction is a kind of evidential reasoning. Think of such games as inference that requires the player to read the signs, formulate hypotheses, collect evidence then discard one possibility in favour of another, and backtrack to earlier propositions. The player learns, remembers and forgets from one move to the next. 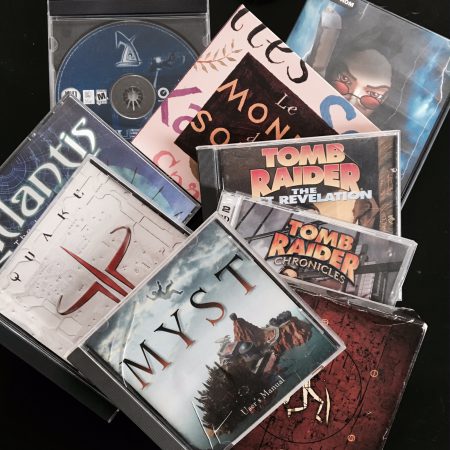 Peirce’s semiotics is useful as it includes signs other than those in spoken and written language, and this makes sense in investigative work. After all, a scientist, explorer, diagnostician, or detective is not scrutinising texts for evidence so much as substances in test tubes, the flow of the river, lumps on the skin, blood stains on the carpet.

The Pokémon player is looking for virtual confetti, groups of fellow players, and signs in the landscape, though it’s more like a game of collection and endless repetition, without the mystery.

More compelling than Pokémon as “abductive games” are mystery adventure games. I know the early game Myst best as such a game, where the player operates as investigator, researcher, and solver of mysteries — a common gaming device.