I retain fond memories of Biology 101 — a lab-based undergraduate science elective in which we lab-coat rookies dissected Formaldehyde-soaked frogs and weighed the collective scalps of lamented snap-frozen drosophila. Not least, we learned the language of nature: zygotes and gametes, monocots and dicots, dominants and recessives, liverworts and mosses.

But no bio-vocabularizing prepares you for the zoo of terms appropriated and invented to conjoin nature with architecture. Rachel Armstrong provides a helpful summary of terms in her interesting book: Vibrant Architecture.

As I’m interested in biosemiotics, it cannot go unremarked just how amenable certain terms are to combination, and subsequent proprietorial and disciplinary claim, branding, and even innovation. The prefix bio- derives from the Greek bios, meaning course of life. A logia is a discourse. So a biology is a discourse about the course of a human life, i.e. what happens, or at least an account of what happens, during someone’s life. Biology is the study of the life course, and not just of humans but any organism. So biology equates to organic life. On the other hand, a discourse about a human life is now consigned to writing about it: i.e. biography (graphos as writing).

Bio then appears as an abbreviated form of both biology and biography — organic life and life stories. Biology has overtaken biography in the stakes for portmanteau dominance. Few would think that biocide means the death of a biographer, biodesign as the design of a biography, or that biomimesis is the impersonation of someone’s life story.

Through its etymology at least, biology is grounded in story-telling, language and communication. So biology enjoys a literary and even semiotic foundation of sorts, at least as expressed in English and other European languages that have commerce with Ancient Greek and Latin.

So perhaps the form of the word nature and its progenitors contributes to its isolation and the difficulties we have in understanding that to which it refers — or perhaps that is nature’s strength.

After such an assemblage, all that remains it to wish readers and blogsters a Merry Biomass! 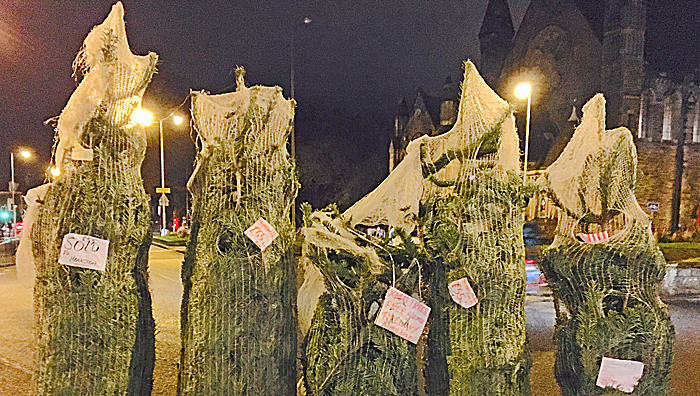