“Either this man is dead, or my watch has stopped” (Marx). I’ve been wrestling with C.S. Peirce’s idea that any moment of communication is potentially made up of three aspects that he labels firstness, secondness and thirdness. Here, the philosopher Gilles Deleuze (1925-1995) comes to my aid. Deleuze invokes Marx  — not Karl Marx, but Harpo, Chico and Groucho — the burlesque comedians and movie icons known as The Marx Brothers.

There were three of them. There’s also the slightly earlier comedy duo Stan Laurel and Oliver Hardy — of whom there were two. Laurel’s character was modelled on Harry Langdon, a solo comic actor. There was one of him. So there you have it: 3, 2, 1.

Oneness: Harry Langdon (1884-1944) was all affect, or at least an “affection-image,” presenting in the silent era via close ups of the face and its expressions. He displayed hapless innocence, as if a child waking from slumber — bewildered, responding to circumstances, delivering the visceral response of the moment, but whose expressions are in need of interpretation and require the response of others who can derive actions from them.

Secondness: Laurel, in the Laurel and Hardy duo presented such a character (oneness), but was constantly goaded and reproached by his more confident partner, Hardy. According to Deleuze, Laurel was “the affective representative, the one who goes crazy and unleashes practical catastrophe, but is gifted with an inspiration which enables him to get through the man-traps of matter and milieu” (221). Hardy is secondness: “the man of action, so lacks intuitive resources, is so much under the sway of brute matter, that he falls into all the traps of the actions for which he takes responsibility, and into all the catastrophes that Laurel has unleashed without falling into them himself” (221). Hardy, the man of action, relied on Laurel, the man of affect (feeling) to create the comedic ensemble, as twoness depends on oneness in all areas of communication.

Thirdness: The Marx Brothers have their Laurel and Hardy counterparts (Harpo and Chico), but includes the thirdness component that comes from Groucho, the wise-guy man of interpretations. For Deleuze

“Harpo is the 1, the representative of celestial affects, but  also already of infernal impulses, voraciousness, sexuality, destruction. Chico is 2: it is he who takes on action, the initiative, the duel with the milieu, the strategy of effort and resistance. Harpo hides, in his immense raincoat, all kinds of objects, bits and pieces which can be used for any kind of action; but he himself only uses them in an affective or fetishistic way and it is Chico who uses them for organised action. Finally, Groucho is the three, the man of interpretations, of symbolic acts and abstract relations. Nevertheless each of the three equally belongs to the thirdness that they make up together” (222). 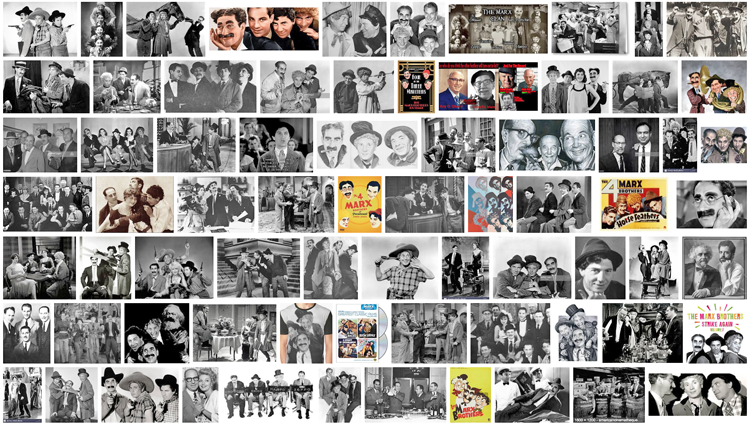 In a previous post (nonsensical signs) I attempted to position nonsense in (or outside) Peirce’s ten categories of signs. But Deleuze seems to think that the ultimate expression of meaning, reason and argument (thirdness) resides in nonsense, at least in cinema:

“Harpo proposes to Chico the enigma of a language of gestures, in a series of mimes that Chico must constantly guess in order to extract a proposition from them. But Groucho pushes the art of interpretation to its final degree, because he is the master of reasoning, of arguments and syllogisms which find a pure expression in nonsense: ‘Either this man is dead, or my watch has stopped’ (he says, feeling Harpo’s pulse in A Day at the Races)” (222).

At the time Deleuze’s wrote Cinema I in the 1980s, burlesque was stronger in the public consciousness than now. Comedy acts don’t come so readily in threes now, and given time I could probably marshal better and more nuanced post-millennial examples.

Deleuze confirms what I thought Peirce is saying. Firstness is abstract qualities understood readily as affect (e.g. raw emotion, a feeling or impression). Secondness is about action, and depends or draws on the affect with which it interacts. Thirdness is the articulated narrative following on from each, which in the passages here Deleuze associates with the syllogism and its denial:

a pulse beats in time with a watch
there is no pulse
therefore my watch stopped.

Peirce’s system of 1, 2, 3 implies that action follows from affect, a view contrary to that of his pragmatist sponsor William James (see post: E-motion), though its traction in the realms of the absurd saves it from that criticism — at least via Deleuze.

To bring matters up-to-date. It is appropriate that Deleuze’s account is in the realm of cinema and fiction. It is the roles, characters and what is said about them that fits the 1, 2, 3 formulation. We don’t need to reflect on the actual character and accomplishments of the actors as people.

To bring the theme up to date — I’m halfway through Michael Wolf’s best seller Fire and Fury, about the Trump White House. After reading some Deleuze, I’m tempted to say that Trump comes across as the affection-image (meaning the pure image of affect) (firstness) — pure, unreflective and unadorned affect (anger, rage, acquiescence, crudity, viscerality, infantile delight). The man is simply a vehicle for various affects, and is treated as such by those who would use and direct him. At least one biographer has said he talks in adjectives and superlatives.

Then there are the apologists, such as the White House Press Secretary, who deliver anodyne repetitive, aphoristic explanations, excuses and remedial actions as a response (secondness). The so-called liberal press, commentators and late-night tv hosts then deliver thirdness, pushing trumpisms to extremes to show the absurdity of it all. In interviews, Wolff said: “You Can’t Make This S— Up” (160): My Year Inside Trump’s Insane White House.