Most cities old and new have underground tunnels, passageways, services, and communication systems, many of these conduits are unused and obsolete. I live in a street with a 15 metre deep tunnel that for 21 years had a rail and cable system for hauling goods and passengers along its 1:27 gradient. The tunnel was since repurposed as an air raid shelter as well as a mushroom farm. It’s now sealed off.

What’s down below is difficult to see at a glance. Local authorities restrict access and there are hazards down there. The invisibility of underground facilities contributes to people’s fascination with such “hidden places.”

In his book Imaginary Cities, Darran Anderson affirms that “When faced with the blank space on the map, we turn to the fantastical” (23). He’s referring to the maps of early explorers. Imaginative storytellers filled in those parts beyond the reach of their surveys with peculiar inhabitants, ghosts, monsters, and unlikely riches:

“cities where the inhabitants are perpetually drunk, where men eat birds and ride around on stags, where marriages are arranged between ghosts, and the lord in his marble palace drinks wine from levitating goblets” (19).

The subterranean has similar blank spaces. That explains in part, our curiosity about life underground, as identified by Paulsay Dobraszczyk and colleagues in their interesting book Global Undergrounds. Having worked the surface, urban scholars turn to mining the depths.

“In what might be termed a ‘vertical turn’, the politics of subterranea is a topic that a range of thinkers have turned increasing attention to” (15).

The labyrinth provides an appropriate architectural type through which to characterise underground places — invoking indeterminate branched and looping passageways, dead ends, losing your way, navigating hazards and with no external clues as to where you are or the scope and scale of the system. (Here’s a picture of some steps leading down to the Blue John Mine in Hope Valley, Derbyshire.) 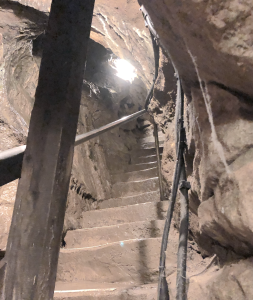 Paulsay Dobraszczyk and colleagues write about the English city of Nottingham: “Nottingham sits above a burrower’s fantasy: labyrinths within labyrinths of private artificial caves carved from the region’s sandstone. Stairways in the backs of pubs, old cellars below houses, the lower reaches of shopping centres and car parks — all butt up against this hidden world” (11).

I’ve not been there yet. I believe this account, but even it it weren’t true, “All great imaginary cities merge the matter-of-fact with the surreal” (21) according to Anderson. We would want to believe in the city’s underground passageways anyway.

“Ungrounded and unreported histories of the Earth are full of passages, vents and soft tunnels mobilized and unlocked through participations with the Earth as a compositional entity. These histories are engineered by openings and that which crawls within them; every movement in these passages invigorates the ungrounding of the earth, engineering what makes Earth, Earth” (66).

These autochthonous references connect earth, origins, and life with the labyrinth, not to mention crawling, oozing grotesqueries and proto-human troglodytes as described by Borges:

“In the sand there were shallow pits; from these miserable holes (and from the niches) naked, gray-skinned, scraggly bearded men emerged. I thought I recognized them: they belonged to the bestial breed of the troglodytes, who infest the shores of the Arabian Gulf and the caverns of Ethiopia; I was not amazed that they could not speak and that they devoured serpents” (104).

As if to reinforce the internality of such passageways, any butcher or spectator of a mangled corpse would recognise the inner world of passages and tubes. Negarestani makes passing reference to the Mesopotamian giant Humbaba, whose

“labyrinthine face (with unicursal human entrails as the beard) recalls the early art of Haruspicy (divination using the liver or entrails) in ancient Mesopotamian cultures” (115).

The labyrinth serves to characterise a gnarled face with knotted hair that looks like intestines.

Negarestani also refers to the Persian word for labyrinth, hezar’to which translates as “a thousand insides” (43). I looked out the urban scholar Somaiyeh Falahat for confirmation. She works through the implications of hezar’to as a potent metaphor of the city.

Re-examining some of the mazes I described in previous posts, they appear as nested rooms within rooms — seven in the case of the classical unicursal maze. The passages as drawn resemble entrails — internal organs. Think of these insides as also inside the earth — a multiplicity of interiorities, a proposition that should excite anyone impassioned about cities and their encrypted networks.

Here are some images from my own collection of insides: catacombs of Siracusa, Sicily; the nuclear bunker in Fife, Scotland; the pedestrian tunnel under the Thames at Greenwich; and a cycling and hiking trail through a disused rail tunnel: the Monsal trail, Peak District National Park. 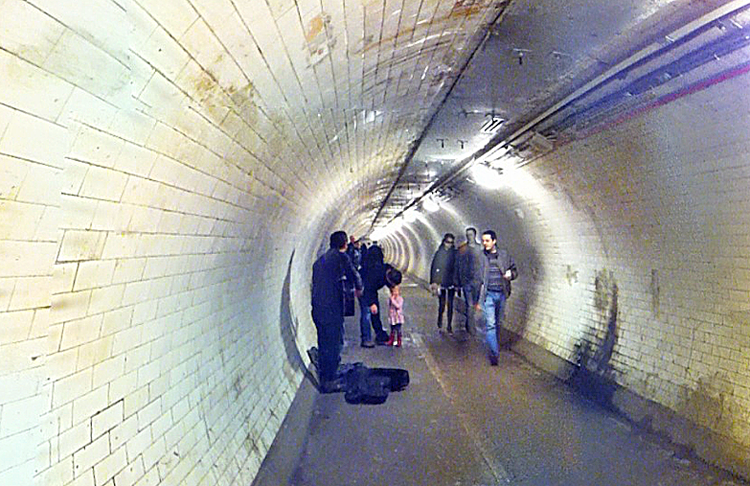