The unconscious is one of those great architectural metaphors. It suggests a layer beneath the visible edifice, a foundation that supports the parts above ground. The unconscious (sometimes referred to as the subconscious) is also the structure, mostly invisible, residing behind the cladding. The unconscious is the incomprehensible complexity concealed by the smooth veneer of consciousness.

Here the metaphor is of a rendering that covers over the irregularities of the rubble wall beneath. It’s the whitewash on the sepulchre; the wallpaper over the cracks; the inhospitable chaos of the natural world now tamed, ordered and made habitable by the rationality that is architecture.

The unconscious is also a metaphor about rooms — the progression from the reception area, the shop front, the presentable public parts of an organisation, to the back rooms occupied by hard-working or indifferent functionaries, where the work gets done in private, where there’s sometimes conflict and mess. If exposed, this back-stage activity might betray the coherence of the organisation’s public appearance … it’s public performance as it were. The architectural unconscious in the home is the closet that conceals the metaphorical skeleton, or simply the place under the stair where souvenirs get forgotten. 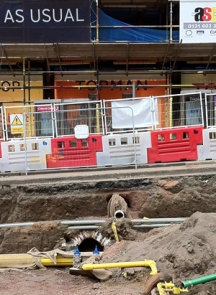 The uncovering of the unconscious draws on an archaeological metaphor. Dig away to find out what’s beneath the surface. It also invokes diagnosis. Signs and symptoms are surface manifestations of an underlying disease. Cracks in the wall require further probing to uncover causes such as ground movement, water seepage, a collapsed tunnel.

Then there are political motivations to any architectural intervention barely “conscious” to users, clients and practitioners. The neo-Marxist polemic of architectural historian Manfredo Tafuri refers to “the contingent and historical realities … hidden behind the unifying terms of art, architecture, and city” (179). Tafuri’s argument is about class struggle and the domination of capital simmering under the surface. For Tafuri, considering architecture’s complicity in capitalist production, the only role left for architectural commentary and criticism is to bring to light the “general aims proposed by the dominant forces in any given phase of development” (169). Marxism advocates the posture of the forensic investigator — skeptical, suspicious and perpetually critical.

Structuralist language theory (see related post) also points to deep structures on which the superficial configuration of syntax, idiom, and accent are built. These latter are the ornaments of language (to invoke a further architectural metaphor). Beneath the surface lie the elusive but common semantic rules that support all the variations and differences between the world’s languages — the sub-communicable semantics that indicate our common humanity, wishes and practices.

These are also the elusive “deep structures” of architecture — the primordial, symbolically-rich substrata of hearth, home, sacrifice, and beauty, or those distinctions between male and female, the sacred and the profane, the microcosm and macrocosm, the raw and the cooked, that might underly all architecture, or that get subverted or suppressed by contingency and commercial necessity.

For Sigmund Freud, the unconscious is associated with urges, desires and conflicts. The role of psychoanalysis is to uncover these as a means of healing various psychological disorders, via catharsis. Even without the idea of underlying pathology, it’s easy enough to assume that most of what goes through our minds is hidden, only occasionally bubbling to the surface during a process of conscious reflection or deliberate decision-making.

The potency of the layered metaphor (of the unconscious) as an explanatory tool is difficult to resist. It’s bolstered by the authority within cultural theory of (i) Freud on the unconscious, (ii) theories of language and culture known as Structuralism (on deep structure, langue), and (iii) the highly influential neo-Marxism of Critical Theory and the Frankfurt School. In fact it’s their common interest in a stratum of “unconsciousness” that allows these three intellectual movements to cross-reference each other with ease.

However, what if there is no unconscious?

Many philosophers, psychologists and linguistics think of the unconscious as a fiction, convenient at best. There’s no need to explain how the mind works by resorting to multilayered processes. Similarly, language and architecture do not require the idea of substrata as a basis of their critiques. Not least, the metaphor of layering eventually leads to some notion of a bedrock, the indisputable foundation, the claim to which closes off the investigation, or worse, the discussion.

Skeptics on the unconscious are not only critical of Freud’s ideas about the unconscious as permeated by dark recesses and forbidden thoughts, but the idea that there is any cognitive activity at all that can be usefully labelled as “unconscious.”

One antidote to unconsciousness that in no way diminishes the thrust of the important intellectual movements that feed off it is to understand all inquiry as subject to the workings of interpretation. To “uncover” an unconscious motivation is simply to proffer a particular interpretation, no doubt hard-won and with explanatory power. A variant strategy is that of deconstruction. In so far as we depend on any kind of layering then invert, distort, and confound the structures.