Who can resist colour! Colour provides a metaphor for pleasure, health and vitality. Spring is colourful; winter is grey. The world of the child is supposedly bright with innocent colours, compared to the dull tones of old age and decay.

Apparently the human visual system responds to light as electromagnetic radiation in the approximate frequency range 400 to 800 terahertz (million million cycles per second). Photosensors in the eye are specialised to respond to three different bands from within this spectrum, each registering as a colour: red, green and blue. The combining of the three visual responses makes up the visible spectrum.

This intricate adaptation indicates close coupling between organism and environment. The eye and brain convert what in measurable terms is just a continuum into a series of colour bandings that excite and stir varied meanings and associations. Though individual responses to colour vary, anyone with full sight recognises the difference between red and yellow, and their associations.

From a biological point of view, the human sensitivity to light and colour depends on a finely tuned combination of sensory processes that (i) biology can support efficiently, (ii) are calibrated to the particular properties of light on the planet, and (iii) enable us to apprehend features in the environment important for survival, such as identifying foods, warnings, and probably a mate.

Colour is undoubtedly complicit in pleasurable experiences, but what of colour-filled moods more sombre, violent or portentous? As was known to the ancients, many synthetic colouring agents turn out to be toxic, as is their means of manufacture and fixing. Here are some images of the photogenically Medieval but notoriously noxious open pits for dyeing leather in Fez, Morocco.

Colour associates with the properties of toxic chemicals, poisons and drugs. In Phaedrus Plato recounts a story in which the art of writing is equated to the use of a drug. Having the facility to write things down intoxicates the writer and manufactures a sense of intellectual confidence and well-being. In his analysis of Plato on this point Jacques Derrida explains that the word Plato uses for “drug” (pharmakon) has many associations. It’s the kind of coloured makeup applied to corpses before burial. Drugs are also both a means of curing illness and of killing the patient. Cure and killing, panacea and poison, treatment and toxin, vibrant and noxious chromatism, are not so far apart — properties associated with drugs, chemicals, poisons and colours (and writing of course, but that’s another story).

Early practitioners of the medical arts, eg Galen (129-200 AD), identified the need to keep the body’s humours in balance, ideas that spill into colour theory. In his Art of Color the Bauhaus theorist Johannes Itten observed:

It seems as though colour pertains to harmonious balance, but also imbalance. Itten explains how the customers of a fabric manufacturer complained that a black thread on a particular red background looked green, which was unacceptable to them. Itten says the solution would have been to dye the thread brown instead of black. Then it would have had the appearance of black in that context. In certain combinations colour harmony becomes unbalanced, and colours need correcting. 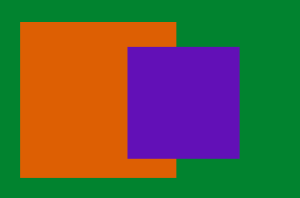 Colour combinations that signal alarm, that certain organisms use to deter predators, seem to deploy what Itten identifies as simultaneous contrast, created when two colours are juxtaposed that are not exactly the complement of each other.

Itten describes several such colour combinations, one of which involves red-violet and red-orange on a green background. The effect of the simultaneous contrast is a clash, “an irritated simultaneous rubescence” (p.89). He could be describing an efflorescent rash. I’ve tried to replicate the colour combination illustrated in his book here. The colours are not particularly arresting in isolation, but when combined, the simultaneous contrast effects cause oscillations — and even nausea in certain situations.

Printers ink and film colour fade. Already our library’s 1961 edition of The Art of Color is perceptibly muted. Recall the graphic aura of the 1960s and 70s, when colour was “rediscovered.” Think of rainbows, flower power and experimentation with recreational drugs. It’s now faded, but I recall at the time the record covers were vivid.

Thanks to back-lit LCD displays we have never been so exposed to the dynamic control of colour, and in full intensity. There are even smartphone apps for false fading (Instagram).

Colour vibrancy, so appealing to children and the child-like moments in adulthood, derives much of its impact from simultaneous contrasts, jarringly rubescent efflorescences, and conspicuously coloured toxifications. 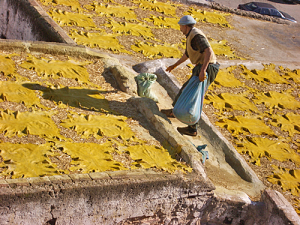 6 thoughts on “Intoxicated by colour”