Pope Benedict made a dramatic helicopter exit from the Vatican this week. Dario Morelli in the Huffington Post said, “A precise, wise and great director orchestrated the video of Benedict XVI’s flight toward oblivion.” Of course Benedict will return to the Vatican, God willing, but as emeritus.

Considering the authority residing in the figure of the Pope, it’s strange to think of this mere “pilgrim” now consigned to an apartment, or haunting the corridors once ruled.In any case, oblivion is not simply grasped. I’ve been reading the anthropologist Marc Augés short book of that title.

Oblivion relates to memory, it’s the “loss of remembrance” (p.15), but at the same time oblivion contributes to memory. Augé presents oblivion as an active agent that erodes and re-forms memories: “Memories are crafted by oblivion as the outlines of the shore are created by the sea” (p.20). Oblivion is not nothing.

If that’s hard to grasp, then Sigmund Freud provides an easier metaphor. In one of his notes, Freud describes human memory through the concept of the “mystic writing pad.” That’s a cardboard writing surface covered in a layer of wax. Overlaid on the wax surface is a sheet of thin paper, with a protective layer of clear plastic over that. As you write or draw on the tablet with a stylus the paper adheres to the wax and leaves dark lines where the stylus has been. (I used to have one of these. It predates Etch A Sketch® and tablet computers.)

To clear the tablet of its drawing and start afresh you simply lift the paper film from the wax surface and start again. An artifact of the process is that the wax surface invariably retains a trace of your scribblings that have been made and already erased. In time these “memories” recede into the background and become obscured by successive overlays, a palimpsest, of new drawing and writing. Freud explains this simple structure and process as a metaphor for the unconscious: “the wax slab with the unconscious behind them, and the appearance and disappearance of the writing with the flickering-up and passing-away of consciousness in the process of perception.” Our memories recede into unconsciousness as if through successive occlusion and layering, as if retreating into the mists of time, and eventual oblivion.

Of course there are many intriguing features of this drawing process, not least the interactions between the layers of memory. Were we able to recover anything from the palimpsest of scribbles on the writing pad then we would encounter new associations and connections. Memory is not so neatly layered.

Nor is oblivion the end of the proess. Augé makes much of the idea of the return. As an anthropologist, he’s able to write with authority about customs in tribal Africa where certain individuals were required to enter into a trance and allow themselves to be possessed by spirits. Such mediums would then return to normalcy and community, and erase what they had just experienced.

The medium “‘re-enters himself’ or ‘finds his own spirit again'” (p.56). That’s an excursion and a return into memory and forgetfulness. If that’s hard to grasp then perhaps travel provides an easier metaphor.

Think of travelling “abroad” as a tourist or pilgrim as a process of excursion and return. Recall a tourist’s journey from home to Rome and back again. Rome has streets, cars, plazas, shops and crowds like home, but different, the familiar rendered strange. Life is a journey, characterised by so many returns. The familiar and the unfamiliar oscillate and embed themselves in any aspect of recollection.

Another way to think of the journey is as a series of waystations, instances of our starting position encountered along the way, echoes of home, or moments of familiarity interspersed with the unfamiliar. My colleague Adrian Snodgrass describes travel like this: “One’s prior home is now understood not as a final homestead, a home where one stands steadfast, but a way station, a starting place for entry into the alien; and what was alien is now one’s own” (p.244).

If the Pope’s exit from Rome was orchestrated by a skilled director, then think also of theatre. Playwright Bertolt Brecht said of theatre, “It must amaze its public, and this can be achieved by a technique of alienating the familiar” (p.9). What can be more alien than a helicopter ride, Ezekiel-like, to signal departure.

The only way to stop this post before it becomes a treatise is to assert the obvious, that introducing oblivion into a discussion of memory is yet another device for alienating the familiar topic of memory, and of Rome. Here’s a picture of the Pantheon in Rome this winter — as I remember it. 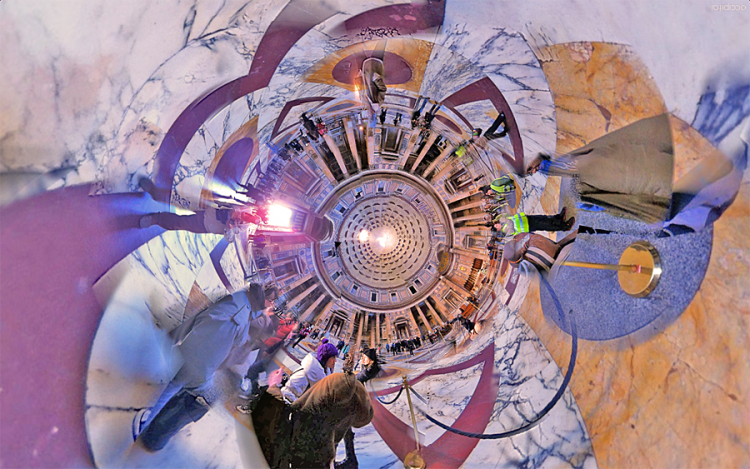