In the opinion of most people, millennials are tech-savvy, materialistic, selfish, lazy and arrogant — according to a 2016 Ipsos global trends survey. By way of contrast the same survey showed how the previous, baby boomer generation identifies itself as respectful, work-centric, community-oriented, well-educated and ethical. The Ipsos report provides some global evidence to correct such “misconceptions,” particularly myths about millennials.

I have run a number of classes on ethics, with a particular focus on digital media. In the past, I adopted the common practice of requiring students to discuss and comment on written case studies. Students would sit in groups around tables and consider ethical conundrums, then report their findings to the larger group. See post from 2015 Testing ethical acuity.

We no longer run case studies. In keeping with our evolving flipped classroom model we dramatise the ethical questions with three mock trials, i.e. moot courts — or debates, running in parallel. The absent defendants in the trials are Edward Snowden, Julian Assange, and Chelsea Manning.

They are accused of disclosing confidential and sensitive information, and/or encouraging others to do so. The question for debate is whether or not the defendants have been acting ethically. The students come to the class with some preparation.

There are legal issues to consider, but in this case we are testing the ethics of the defendants. All three, and their supporters, would claim they are operating ethically, providing a community service, and bringing to light a series of unethical and illegal corporate and government practices. 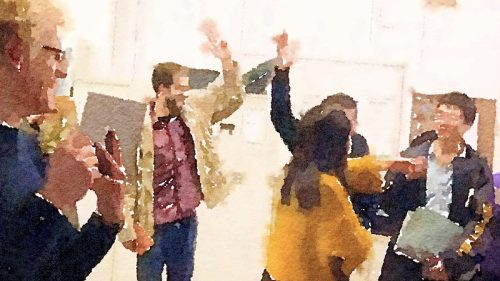 Information wants to be free

As is often the case with barristers, advocates, and debaters the students were required to suspend their own personal judgement and were given one of two propositions to argue: We support or do not support the view that the defendant was acting ethically.

This is the third year of running these trials, and the overwhelming view amongst students is that the defendants are on the whole innocent of any ethical charge. I have to say, I’m less interested in the ethics of Snowden, Assange and Manning than how discussions about these cases reveal attitudes to information, intellectual property, privacy, secrecy and the authority of institutions.

I’m here glossing over the nuanced discussions, but the class on the whole thought that information should be freely available, and exposed when it is held in secret: e.g. that Wikileaks exposes information that should be available anyway, and has done more good than harm.

This confirms what we found when we ran this ethics class with written case studies in previous years. The most animated ethical discussions orbited around access to information, online media content and copyright.

An obvious case study would follow the scenario: “Would you accept a movie file from someone who downloaded it from an illegal site, i.e. if it was acquired without payment and in obvious breach of copyright?” Most students would decide “yes,” and without apology, embarrassment or qualification.

There is an easy way of accounting for such ethical postures. Postgraduate students are a microcosm of the millennial generation, and of global society at large. Though diverse in many respects, students are mostly

These factors may skew the responses towards the view that information needs to be free and/or freely available, and exposed. It also needs to be verified, dated, accurately sourced, etc, but that’s for another discussion, as is the presumption that actors on the Internet stage are all of goodwill. See post: Emotional targeting.

When we put to students the question of whether they would approve of having their own information (about academic results for example) made available publicly, the initial answer was “yes,” a response conditioned no doubt by their recent discussion about the free circulation of information. But the view soon transitioned to a firm “no” during discussion.

Double standards? Along with the Ipsos report, I’m reluctant to say that there’s been any kind of diminution in ethical standards, or an increase in opportunism and self interest amongst millennials.

In fact, the focus of this particular group (in this particular context) was that the exposure of apparent corruption amongst the powerful surpasses considerations of secrecy and security. That’s certainly an ethical stance. Also see other posts tagged ethics.