In his book In Praise of Shadows, novelist Junʼichirō Tanizaki recaptures what is otherwise lost under the glare of modernity. As indicated in the title, he favours the half light, shadows and darkness of recesses, verandahs and outhouses, and with them the patina and ambiguity of materials worn over by time: old wood, stone, moss, etc.

As children of the Enlightenment, it is inevitable that metaphors of light, with their entailments of certainty, confidence and clarity, dominate our engagement with reason, truth and logic.

Mathematician and architect Lionel March’s seminal essay, “The logic of design and the question of value,” cautions against confidence in systematised design methods. He illustrates this uncertainty with C.S. Peirce’s three modes of inference: deduction, induction and abduction. (See previous post.) March positions design in the uncertain but productive mode of abductive inference — inventing the cases about which deductions can be made.

I was struck by March’s use, in passing, of the term “shadow of doubt.” These are the black remnants in March’s inference diagrams, redrawn here (17). The three columns provide permutations of the elements of the syllogism

The top row of fragments of 3 intersecting circles (i, ii, iv) shows the condition we would like to assert with confidence, if only we could. The cases iii, v and vi indicate the degree to which the support for the condition in the top row is lacking — the shadows of doubt.

Here is March’s caption to the diagram (his figure 5 on page 17). I’ve adjusted the labels to the six circular diagrams (i-vi), and changed his use of “x ≤ y” etc to “x is in y” (all in square brackets []). I introduced the bold type not in the original.

“Peirce’s three modes of inference. There is one form of analytic reasoning, the deductive, shown in [i] as logically determined. There are two forms of synthetic reasoning, the inductive and the productive [i.e. abductive]. The hope in inductive reasoning is to arrive at the conclusion shown in [ii]. However, there is no logical necessity for this and the typical outcome must look like [iii] where the black part of y indicates the amount by which the rule [y is in z] is not met. Abductive reasoning has three distinct possibilities. In [iv], as in the ideal world of Sherlock Holmes, the motive (rule) and the evidence (results) conspire ‘beyond all reasonable doubt’ – but without logical certainty – to prove the accused guilty (case). In [v], more typically, there is a shadow of doubt marked by the black part of x suggesting the degree by which [x is in y] is not supported. [vi] is yet another possibility. Here the evidence and the motive simply do not tie up: x, the black zone, is disjoint from y.”

(It’s what Americans like to call a “nothing burger.”  The alibis are in place. The evidence doesn’t stack up. It’s a null or Nunes hypothesis.)

It may also help to recognise that the diagrams are derived from three intersecting circles containing all possible common areas. 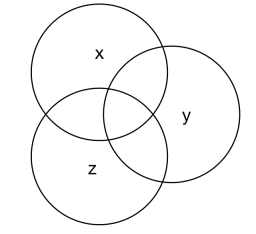