I sold most of my bit coin last November and made a bit of a profit. Should I buy some more now it’s gone down in price? How do you reason under uncertainty?

From a hermeneutical perspective we are always in an uncertain condition, though you might as well call it “contingency.” How you interpret, understand and act, depends on circumstances, which in turn draw on your background, history, the company you keep, the sense of your community (common sense), values, beliefs, habits, practices, the material circumstances of the moment, and of course, advice.

How we interpret, understand and act may be embedded in our practices without reflection, or they can be the subject of a concerted process of decision making, hesitation, debate and dispute with or without resolution.

For hermeneutical scholars such as Hans-Georg Gadamer, to interpret, to understand and to act (apply our understanding) are the same process. To understand a situation is to act in it. If there are stated rules and norms, then their application is also contingent, a matter of interpretation.

Formal logic rarely comes into play or decides the matter, or, at least, logical deduction is rare, where one proposition follows another in an inevitable chain of inference. For C.S. Peirce, reasoning is mostly abduction, a reverse process of inference by which we try to create the situation about which inferences could be made to deduce a conclusion — a conclusion that we assume ahead of time.

Peirce explains the primary role of abduction in human reasoning. The ubiquity of abduction fits the hermeneutical model, as long as we don’t feel the need to adhere to formal logic (as does Peirce) in defining what it is to reason, judge and think.

Indeed, for Peirce, we exhibit abductive judgements via a range of processes, not least is the sudden flash of an understanding (a “hunch”) that is not the result of a formal process.

“The abductive suggestion comes to us like a flash. It is an act of insight, although of extremely fallible insight. It is true that the different elements of the hypothesis were in our minds before; but it is the idea of putting together what we had never before dreamed of putting together which flashes the new suggestion before our contemplation” (227).

He adds that this kind of abduction is “a process not sufficiently conscious to be controlled” (227). (See post about thinking fast.) He declares that if we were to subject this abductive process to logical analysis then we would have to accept that it follows a chain of  inferences that never ends.

In fact, “because it is subconscious and so not amenable to logical criticism, does not have to make separate acts of inference but performs its act on one continuous process” (227). The instantaneity of such sudden (abductive) insight testifies that something is going on other than formal logical processes. That is not to trivialise or mystify such apparently instantaneous processes. We interpret, judge, decide, act from moment to moment, and all the time. For the purposes of argument, I am content to equate Peirce’s concept of abduction with hermeneutical concepts of interpretation.

Conceding to C.S. Peirce the centrality of semiotics, abductive reasoning inevitably brings signs into play at some stage, as we gather evidence, during the thought process, in conversation or in retrospect as we justify our interpretations, understandings and actions.

A helpful (online) article by Gary Shank and Donald Cunningham outlines 6 modes of abduction consistent with Peirce’s categories of the sign. They use the term “evidence” throughout. Signs go to make up the evidence that informs an abductive inference.

To paraphrase the first part of their article, abductive interpreters can follow a hunch (or make a guess), taking their own unarticulated feelings about a case as evidence. This is a qualitative assessment with little apparent ground. It is a raw and poorly articulated feeling, as described above.

But in abduction we can also follow the evidence of a symptom; or move from one frame of reference to another via analogy or metaphor; we can pick up clues, as does the investigator of a crime (according to detective stories); we can formulate a diagnosis compiled as a set of clues; and/or we can follow the route of ascertaining facts on the basis of how they can be woven into a plausible narrative or explanation.

It is helpful to review these modes of abduction, or sources of evidence, in relation to Peirce’s ten sign classification system. 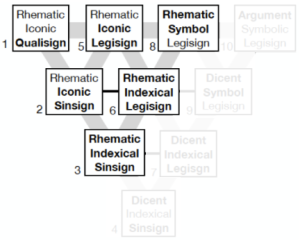 Deduction seems to pertain to the notion of argument — number 10 faded out on the diagram. This is the evidence gleaned from strict logical inference. Induction pertains to the notion of the dicent (4, 7, 9), a complete qualitative expression (e.g. all men are mortal, all swans are white). Abduction belongs to the rheme, which is an “open propositional function” according to Shank and Cunningham. Most types of sign with which Peirce is concerned fall into this category. Here are six categories of evidence by which we abduct (i.e. interpret).

I’m still trying to find out how and where Peirce makes these precise correlations in his writing, whether they include every candidate for abduction, and how algorithms that work with abductive probabilities fit this schema — assuming the schema is right.