C.S. Peirce is amongst the great geometers (or diagrammaticians or combinatorialiasts) of thought. We can also admit the contemporary philosopher of so-called “speculative realism,” Graham Harman, to the four sided pantheon with his book The Quadruple Object. The book is about much more, but in passing happens upon a good justification for the combinatorics of ones, twos, threes and fours.

With some irony, he says that philosophers look for simplicity:

“The number one is the password of monism. Despite its comforting promise of holistic unity, it tends to be too sanguine in its implicit assertion that difference and strife are less real than a primal harmony of things. The number two seems to announce a conflict of two opposite principles. But such dualism turns out to be paradoxically monotonous, since usually nothing occurs but a constant struggle back and forth across the divide. The number three seems more sophisticated, with its claim to unify two opposed principles in a dynamic third term that both preserves and transcends the crucial features of the two opposite terms” (79).

He thinks of threeness as a dualism with a mediating third term added in, as promoted by Hegel and Heidegger. Harman thinks that the introduction of a third term runs the risk of neutering “the tragic force of opposition” (79). He doesn’t here refer to Peirce’s take on threeness. 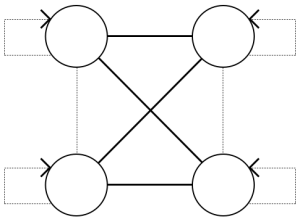 Harman favours fourness. It maintains the characteristic antagonism of a dualism, but “avoids the intrinsic monotony of this struggle by spreading it onto a second axis, creating a rich tension between four roles of the world” (79).

He then lists some of the key examples of fourness, amongst the great thinkers, eventually alighting on Heidegger’s fourfold (Geviert). The fourfold is derived from 2 axes of division.

The success of any philosopher’s quaternary tactic depends on: (1) How meaningful are the initial two divisions. Do they divide the world into two meaningful (and perhaps comparable) divisions; (2) Does the fourfold schema that results provide a set of interesting relationships between the four poles?

“These polls do not stand side-by-side in static isolation; we can already see them in tension with one another. They enter into various permutations, two at a time” (80).

Harman reminds us that there are ten ways that four elements can be taken pairwise, assuming an element can be paired with itself.

I couldn’t help but think of Peirce’s derivation of ten kinds of sign, from a pyramid of 4+3+2+1.

The fourfold on which Harman alights is Heidegger’s (1) gods (2) mortals (3) sky and (4) earth, which Harman wants to analyse in terms of its ten combinations of two. (See also blog post: Well-being and geometry.)

I look forward to reading how this 2×2 tactic leads Harman towards his goal of demonstrating the existence of objects independent of how we humans think about them, and his disdain for pragmatism. 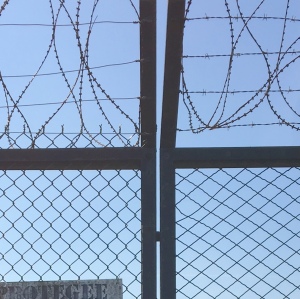