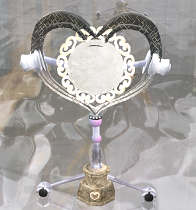 Shōjo Manga is a genre of Japanese graphic novel, animation and merchandising that’s marketed for a young female audience. Search images for “Princess Tutu” for some saccharine sweetness laced with cute gooeyness. You could be forgiven for thinking it’s kids’ stuff. But whatever manga is, it’s not innocent. We are not 14 anymore. Transformation features as a strong theme in manga, according to scholar June Madeley. Already there’s the graphic transformation of the young girl into an idealised Western fashion magazine stereotype (those astonished round eyes and long legs), and the thin “feminised” male characters (if they are “good guys”). Characters sometimes switch genders: “In manga there is a long history of highly fluid and often ambivalent depictions of gender, sexuality, and gender relations” (p.800). The child in the story may also have their wish fulfilled to be transformed instantly into a mature teenager or woman, even temporarily. Characters such as Madoka Magica are highly “sexualised.”

Manga represents a reciprocal play in otherness. There are European manga conventions. I stumbled across one in Copenhagen of all places last year. Western teenagers were dressed in costumes to look like characters from manga comics that in turn mimicked or parodied European dress, all under the purview of a vigorous merchandising regime. Of course manga shops can be found in any European city.

Dressing up and transformation are part of “growing up,” which is a slightly more paternalistic way of referencing what Freud identified as the “rite of passage.” Whatever the controversies surrounding his theories of human development, one of Freud’s great contributions was to take the cuteness out of childhood, and render it other: the Oedipal condition, the boy desiring the love of his mother and wanting to kill his father, the girl offering to her parents excrement as her first gift, later to be transformed into desire for a baby. These are themes of repression easily extracted from the Grimm brothers stories, Alice in Wonderland, Harry Potter, or Madoka Magica. If childhood is about guilt, trauma and cover-up then nothing is indeed innocent.